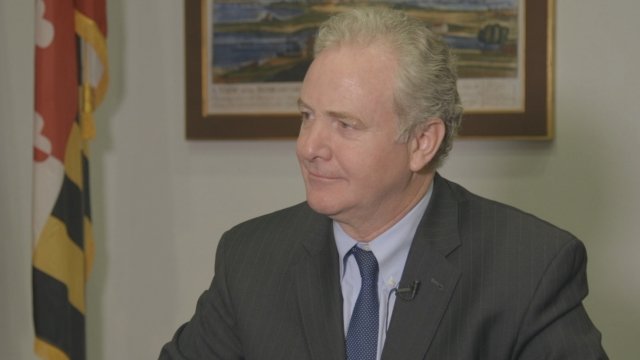 Pretty much everyone agrees Russia interfered with the 2016 presidential election, and President Trump's national security team agrees it's happening again during the ongoing 2018 midterms.

The Trump administration says it's working to make sure voting systems and the electoral process are protected, but that's likely not going to stop any country that really wants to interfere from at least trying.

Enter the DETER Act. It was introduced by Sens. Marco Rubio and Chris Van Hollen. They originally introduced the bill in January, but D.C. has recently started to pay a lot more attention to it.

"After the spectacle of President Trump and President Putin in Helsinki, a lot of our colleagues said, 'Hey, let's take a look at that DETER act,'" Van Hollen told Newsy.

Essentially, the DETER Act says after an election is over, the director of national intelligence has 30 days to determine if a foreign country interfered. And if it's Russia, unlike the sanctions Congress enacted for 2016 interference, some automatic sanctions would hit, without the need for presidential approval.

"We know what Russia did in 2016, and in order to deter them, we thought it was important to set up in advance, 'Here's what's going to happen: A lot of your banks are going to get hit, your energy sector is going to get hit, any oligarch who is found to be conniving and interfering will be hit,'" Van Hollen says.

And the definition of "interference" is pretty broad. It covers things we would all agree on: hacking into systems and releasing the stolen information a la 2016, hacking election registration systems or purchasing ads. But it would also cover any significant effort from trolls on social media.

Van Hollen says that broadness is necessary to make it clear to countries like Russia that America isn't putting up with that and for Americans to know how seriously Congress takes election security.

"If people lose faith in the results of elections, you will undermine the confidence in our democratic system," Van Hollen says.

Van Hollen says they are gaining supporters for the bill by the day, but they're working on some of the language to give it the best chance of making it off the Senate floor. And it's definitely going to be a tricky sell in the House, where Congress seems a little more reticent to go against the president — not to mention getting the president to sign off on it. But Van Hollen stays confident.

"If the president vetoes this bill, then he is saying to the entire country he's throwing the integrity of our democratic process under the bus for 2018," Van Hollen says.