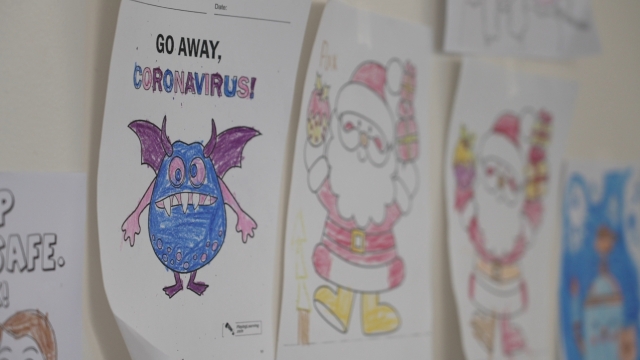 Vaccines for kids in rural areas are few and far between, with many pediatricians not even administering them.

For millions of parents in the U.S., getting a COVID-19 vaccine for their kids is as simple as a few clicks, filling out some forms, and driving to a nearby clinic.

"We were so hopeful even back this summer when we first started hearing about, like, how soon it might be approved for children," said Annie Edwards, a mother in rural Montana.

She's hopeful, because she knows what it's like to have a sick kid.

Her daughter Hannah was born at 27 weeks, weighing one pound. But for the 57 million people like Edwards who live in rural America, vaccine approval means nothing if they can't find a shot.  She drove to Billings, Montana, in December  —  a 500-mile round trip to get her daughter her first dose.

"Why are we having to drive this far? Why is it this hard?" asked Edwards. An hour before the second appointment, the store canceled because it ran out of vaccine.

"In rural areas, where people are spread out, there's much less opportunity for kids," said Dr. Jennifer Kates, senior vice president of the Kaiser Family Foundation.

"You know, we live in the United States of America, where we have the most access," Edwards said. "This shouldn't be difficult."

Right now, Pfizer's vaccine is the only one approved for children. It's a smaller dose. Current minimum shipments come in a 10-vial pack, with 10 doses per vial.  The company said that's to "better suit the needs of pediatric clinics." They can be stored for up to 10 weeks in refrigerators.

"Once you open the package, you have to use those within 12 hours. And if a provider wants to vaccinate one kid —  they have to vaccinate 10 kids to not waste any, so that's a big challenge that we've seen with smaller providers and doctors' offices. They have to figure out, should I even do this," Kates said.

Edwards' pediatrician told her she's not vaccinating kids against COVID.

A Kaiser Family Foundation poll found more than one-third of rural parents said their health care providers are not even recommending the vaccine for kids.

"If a pediatrician isn't encouraging it, that could really be a deterrent for a parent," Kates said. "And it could be the situation where the pediatrician themselves doesn't have the vaccine.

Punching many rural zip codes into vaccines.gov will lead you to a page showing no pediatric shots within 25 miles, with some availability 50 to 100 miles away.

"If you're a parent who's on the fence, you know, what's going to tip you if you then have to say, well, I'm going to drive 250 miles to do this thing that I'm a little bit wary of. Or even if you're an eager parent, if you don't have a car, if you can't take time off from work, what are you to do," said Kates.

"There are some places that have put in operation mobile clinics to try to reach kids in those outposts. But that's sort of the exception, not the rule. It's incredibly difficult. And, of course, when they're the only person who's asking for it in their community, they don't have support. And that makes it even more difficult," Kates continued.

It's a story pediatrician Kathy Rogers is familiar with. She came out of retirement to help administer vaccines.

"I can't sit this one out. This is too important," Rogers said.

Some of the children at her clinic have traveled up to four hours round trip, twice.

"It breaks my heart and I would like to go door-to-door and just offer it to people, and if they don't want it, fine," said Rogers.

"We have work that lies ahead for rural America, and in general for the country, but really in rural areas," said Kates.

Montana data shows no kids between 5 and 11 in McCone County are fully vaccinated, with many other counties at 5% or less. Stats show similar rates in parts of rural Idaho, with numbers as low as 1% in places. And it's the same story in parts of Wyoming.

"You can try as hard as you can not to waste vaccine. But if I can give one vaccine to one person, even if I have to waste the whole other dose, I'm going to do that. Because like with Omicron, the infectivity of it is just like measles. It's so high that I protected more people by doing one vaccine than doing none just because I want to save the vial," Rogers said.

In addition to access, there's statistically more vaccine hesitancy in rural America, driving down demand. A Kaiser Family Foundation study found almost half of rural parents say they definitely will not get their 5- to 11-year-old vaccinated, compared to 22% of urban parents. But if interest is low, Rogers said counties can and should work together to share doses, to reach as many as possible as Omicron keeps its grip on the country.

"If you don't get out there and do this for people, what does that say? We've got to take care of each other. And I take care of my family, but my community is my family. It's too important to know those health care workers all feel that way. And that's why some of them are quitting because they feel this so intimately," Rogers said.

Kates said some states, like Maine and Vermont, have gotten the vaccination effort right from the start, and there's more that can be done elsewhere.

"From a broader perspective, states and certainly the federal government, can look at how they can pre-position vaccines for remote areas. So, finding the right pharmacy sites, doing mobile clinics to go to people, setting up actual vaccine clinics periodically, where you're really advertising and pushing out that information to communities, it still means that not everyone's going to be easily reached, but you have to make those opportunities more frequent, and visible and easy for parents," Kates said.

Edwards hopes to get her daughter's second vaccine dose at a neighboring county's clinic soon.

It will mean about 200 miles round trip. She, and others, don't think it should be this hard.