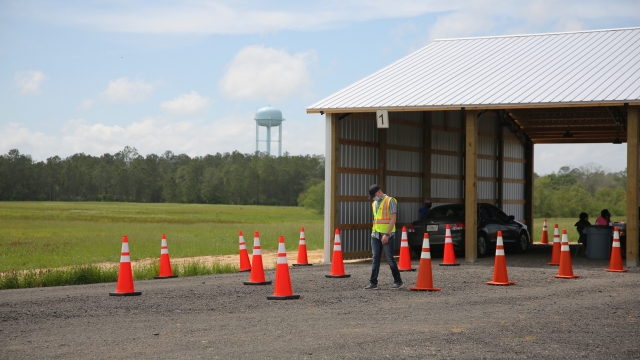 SMS
'It's Not For Lack Of Trying': Vaccine Hesitancy Haunts Rural Florida
By Nathaniel Reed
By Nathaniel Reed
April 9, 2021
In Florida, anyone age 16 and older can get vaccinated, but Newsy found many in the Sunshine State still haven't gotten in line for their shot.
SHOW TRANSCRIPT

Despite its high population of senior citizens, Florida remains in the bottom half of states where residents have received at least one shot.

Across the Sunshine State, Washington County in the Florida panhandle has nearly the lowest rate of vaccination in the state.

According to the CDC, just over 10 percent of residents here have received either their first or second shot of the COVID-19 vaccine.

"It was really easy," said Wanda Grant, who received her second dose of Moderna's COVID-19 vaccine at the Washington-Holmes County Vaccination Site.

But Grant's son, she says, is hesitant.

"He’s 50-something years old, I can't make him do anything," she told Newsy. "He also can't make me not," she added with a laugh.

Grant's was just one of a handful of cars rolling through the facility, which has been open since March.

The site's numbers are dropping off after the initial enthusiasm — a reported 1,000 people showed up on the site's first day.

Now, the queue, which was built to accommodate dozens of cars, is seeing just a trickle.

"I was absolutely on the fence," said Will Mixon, who received his first dose Thursday. "I decided to go ahead and do it because I figured I was better safe than sorry."

Across the U.S., vaccine hesitancy remains one of the biggest obstacles to reaching herd immunity.

According to the Kaiser Family Foundation, 20 percent of Americans living in rural areas say they don't want to get the vaccine.

Mixon, who lives in nearby Leonia, Fla., said only about half of his friends and family plan on getting the shot.

He said vaccine hesitancy among his community was largely due to distrust in the government, the fast-tracked development of vaccines, and the county's low population density.

"We feel like we're pretty safe in the woods, honestly," he said.