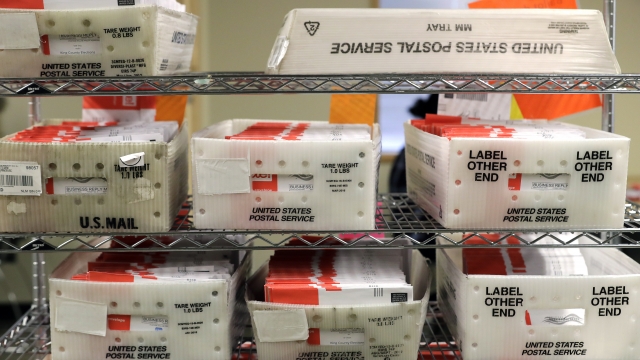 SMS
U.S. Postal Service Cuts Back Sorting Machines As Mail-In Voting Nears
By Sasha Ingber
By Sasha Ingber
August 14, 2020
Hundreds of mail-sorting machines are being pulled and some blue mailboxes are being removed months before mail-in ballots are expected to surge.
SHOW TRANSCRIPT

The U.S. Postal Service is removing hundreds of high-speed mail-sorting machines from processing facilities, months before the demand for mail-in ballots is expected to surge.

"It's disheartening to all of us. It's difficult for us to do our job and do it efficiently and the way that we want to do it when we continually have these barriers put up in front of us," says U.S. Postal Service associate Lori Cash.

It’s also removing some of its iconic blue mailboxes from streets across the country.

Concern is rising for the cash-strapped federal agency. The president has railed against it. And postal unions fear mail is intentionally being slowed when efficient processing is more needed than ever for the election.

A USPS spokesperson tells Newsy the mail-sorting machine removals are a cost-saving measure — that the Postal Service "routinely moves equipment" to match demand, and that mail collection boxes that receive small amounts of mail cost money, fuel and time: "Removing the box is simply good business sense in that respect."

The sorting machines were supposed to be pulled about a year ago, according to a spokesperson for the American Postal Workers Union. CNN reports 671 machines across dozens of cities are being removed. And the head of the postal workers union in the swing state of Iowa confirms machines are being eliminated there.

"In Iowa, we are losing machines. And they already in Waterloo were losing one of those machines. So that also hinders our ability to process mail in the way that we had in the past," says Kimberly Karol, president of Iowa Postal Workers Union.

The fleet of multimillion-dollar machines are said to process as many as 35,000 pieces of mail per hour — and it comes amid a postal service overhaul that has left mail piled up at facilities.

"I was raised in the postal system. You never delayed mail. So these are very troubling changes," says Mark Dimondstein, president of the American Postal Workers Union.

Last week, in a letter to Democratic lawmakers, the Postal Service flagged it might be shifting or removing equipment to maximize efficiency. Dozens of Democrats this week sent a letter this week to the new Postmaster General, urging him not to take any actions that could hurt Americans' ability to vote in November.

Former President Barack Obama weighed in Friday, saying, "Everyone depends on the USPS. … They can't be collateral damage for an administration more concerned with suppressing the vote than suppressing a virus."

That was after President Donald Trump said he'd block emergency money in a coronavirus recovery bill for the Postal Service because it would be used for mail-in voting. Remarks he later walked back after being pressed by reporters.

"If the money came into the service that we need through the stimulus, it would allow us to bring the machines back that are necessary to make the plants efficiency and increase our service. And it would also allow us to recover the losses that we had that we took during the pandemic," says Cash.