Trump Announces US Will Leave Nuclear Treaty With Russia 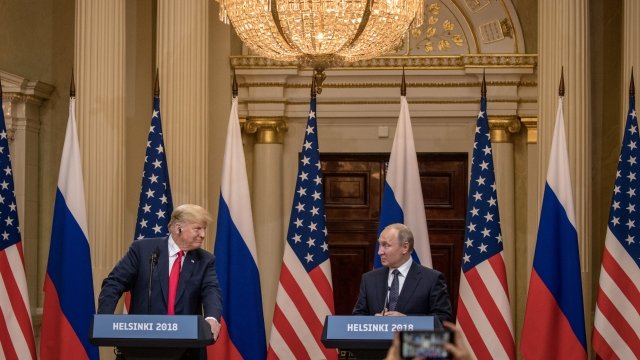 SMS
Trump Announces US Will Leave Nuclear Treaty With Russia

By Sebastián Martínez Valdivia
October 21, 2018
President Trump accused Russia of breaking the treaty, something the U.S. has alleged for the past several years.
SHOW TRANSCRIPT

The U.S. is leaving a major nuclear weapons treaty with Russia that's been in place for more than 30 years. President Donald Trump made the announcement Saturday night, arguing the treaty unfairly disadvantaged the U.S.

Russia has already criticized the move and denied the president's allegations that it has violated the Intermediate-Range Nuclear Forces Treaty. According to the country's state news agency, a senior Russian official threatened "retaliatory measures" if the U.S. continues to withdraw from agreements.

President Ronald Reagan and General Secretary Mikhail Gorbachev signed the treaty in 1987. It prohibits land-based nuclear missiles with ranges from 310 to 3,420 miles.

Since 2014, the U.S. has accused Russia of violating the treaty by testing and deploying banned missiles near its borders with former Soviet countries.

One motivation for the U.S.' withdrawal is reportedly China. The country isn't part of the treaty, and administration officials have said that gives Beijing an advantage in the Pacific.