US To Withdraw Last Diplomatic Staff From Embassy In Venezuela 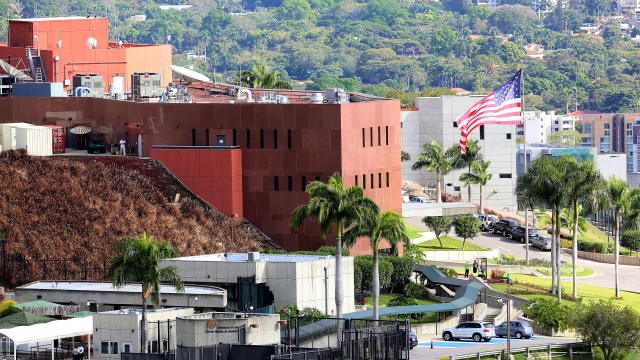 SMS
US To Withdraw Last Diplomatic Staff From Embassy In Venezuela
By Katherine Biek
By Katherine Biek
March 12, 2019
The U.S. State Department previously ordered all non-government employees and their families to leave Venezuela back in January.
SHOW TRANSCRIPT

Secretary of State Mike Pompeo announced late Monday that the U.S. is withdrawing the last of its diplomatic staff from its embassy in Venezuela.

In his announcement, Pompeo cited the "deteriorating situation in Venezuela."

Much of the country has been without power since Thursday evening. Blackouts happen every day in Venezuela, but rarely of this scale. The lack of power has left people without access to medical care, food and clean drinking water. CNN witnessed dozens of people Monday filling water bottles at a contaminated river just to meet their needs.

In a televised address that same day, Venezuelan President Nicolas Maduro said it'll be a while before power is fully restored — noting recovery will happen "little by little."

Maduro's blamed the U.S. for sabotaging the country's power grid with a "cyberattack." But Venezuela's opposition leader, Juan Guaidó, said the blackouts are actually the fault of a corrupt Venezuelan government. The National Assembly declared a state of emergency over the power outages Monday at Guaidó's request.

The U.S. State Department previously ordered all non-government employees and their families to leave Venezuela back in January. Pompeo said Monday that all of the remaining diplomats would be out of the U.S. embassy in Caracas by the end of the week.