US To Begin Withdrawing Troops From Southern Border 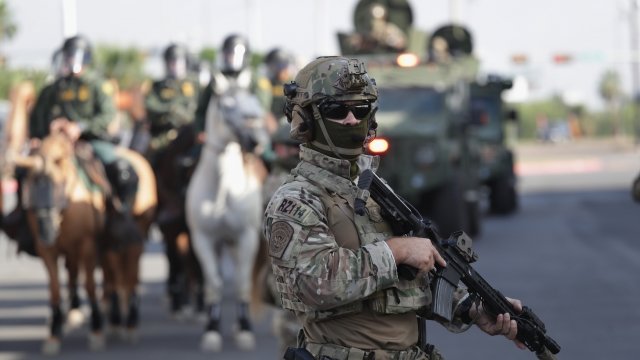 SMS
US To Begin Withdrawing Troops From Southern Border
By Ahmed Jawadi
By Ahmed Jawadi
December 10, 2018
​More than 2,000 active duty troops will leave before the holidays.
SHOW TRANSCRIPT

The U.S. will begin withdrawing many of the troops sent to the U.S.-Mexico border this week.

U.S. officials said Monday more than 2,000 active duty troops will leave before the holidays, according to the Associated Press. About 3,000 of them will remain to help border patrol agents in Texas, California and Arizona. The troops were initially scheduled to stay until mid-December, but Defense Secretary Jim Mattis extended their deployment until the end of January.

The Department of Defense announced in late-October it would send thousands of active duty troops to the U.S.'s southern border, in response to a caravan of migrants traveling north through Mexico. As of three weeks ago, the Pentagon estimated the cost for troops deployed was around $72 million.