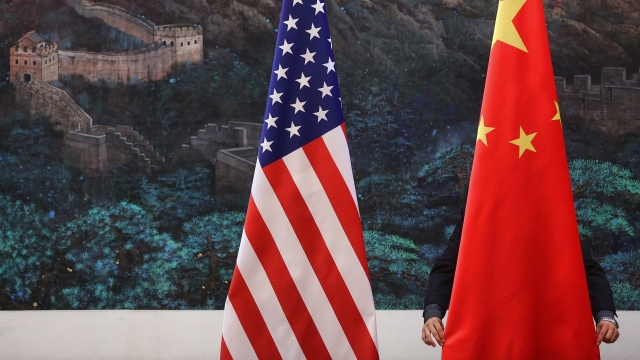 SMS
US Stocks Had Their Worst Day In Months After China Tariff Retaliation
By Cristina Mutchler
By Cristina Mutchler
May 13, 2019
Following China's announcement to place more tariffs on U.S. goods, Monday marked the biggest one-day loss for the Dow and S&P 500 since January 3.
SHOW TRANSCRIPT

Markets opened and closed in the red on Wall Street Monday amid ongoing trade tensions between the U.S. and China.

It was the worst day for U.S. stocks in months, with the Dow finishing more than 600 points lower.

Investors were reacting to the news that China is raising tariffs on roughly $60 billion worth of U.S. goods, effective June 1. That's after the U.S. said Friday it would increase tariffs on billions of dollars of Chinese imports.

President Donald Trump addressed the issue at the White House Monday, and said he plans to meet with Chinese President Xi Jinping next month.

"China has been taken advantage of by the United States for many many years. And we can't let that happen. We're in a very strong position, our economy has been very powerful. Theirs has not been," he said. "We're dealing with them, we have a very good relationship. Maybe something will happen. We're going to be meeting, as you know, at the G-20 in Japan, and that'll be I think probably a very fruitful meeting."

The president also said he hasn't made a decision on whether to impose tariffs on a remaining round of Chinese goods, which experts say is worrisome to investors.

On Tuesday, analysts will get U.S. import and export price data along  with a look at China's retail sales and industrial production numbers.