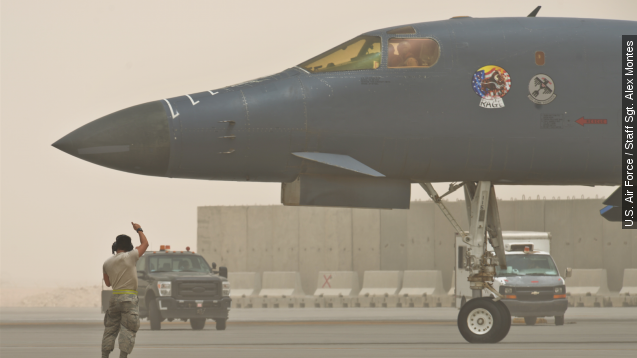 SMS
US Says It Took Out 10 High-Ranking ISIS Leaders In 1 Month
By Jake Godin
By Jake Godin
December 29, 2015
Half of those killed were leaders who planned attacks against the West.
SHOW TRANSCRIPT

The U.S. says it’s killed 10 high-ranking ISIS officials with airstrikes in the past month. (Video via U.S. Central Command)

Half were "external operations facilitators" — basically, leaders who planned attacks against the West.

One target, Charaffe al Mouadan, supposedly had a direct link to Abdelhamid Abaaoud, the man believed to have led the Paris attacks. Mouadan was killed Dec. 24.

French media reported a Paris attack survivor from the Bataclan heard one of the gunmen mention Mouadan by his nickname.

Another man Abdul Qader Hakim also had connections to the Paris attacks. He was killed near Mosul on Dec. 26.

The U.S. has stepped up airstrikes in both Iraq and Syria to support forces fighting ISIS.

That includes places that aren’t necessarily on the frontlines.

"So my point is this: We will continue to hunt [ISIS] leaders who are working to recruit, plan and inspire attacks against the United States of America and our allies," Operation Inherent Resolve spokesman Col. Steve Warren said during a press conference.