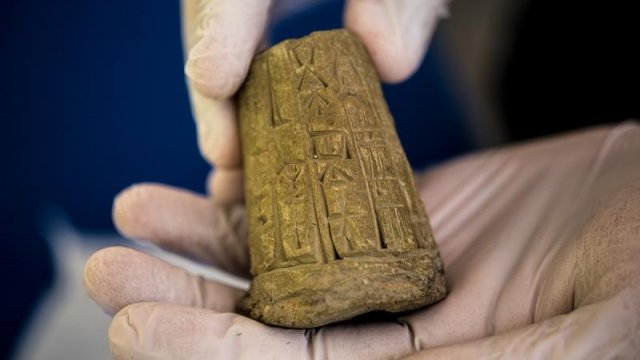 SMS
US Returns 3,800 Iraqi Artifacts Illegally Smuggled To Hobby Lobby
By Katherine Biek
By Katherine Biek
May 3, 2018
According to officials, packages containing the artifacts had been shipped to the U.S. with labels stating they contained tile or clay samples.
SHOW TRANSCRIPT

The U.S. returned nearly 4,000 ancient artifacts to the Republic of Iraq on Wednesday.

The artifacts, which included cuneiform tablets and clay bullae, had been illegally shipped to the U.S. arts and crafts chain Hobby Lobby. According to officials, packages used to ship the items had been falsely labeled as tile or clay samples.

After the Justice Department brought civil action against Hobby Lobby, the company agreed to forfeit the artifacts and pay a $3 million fine in 2017.

U.S. Immigration and Customs Enforcement officials handed over the artifacts to the Iraqi ambassador Wednesday.

Some of the artifacts reportedly date back to 2100 BC.