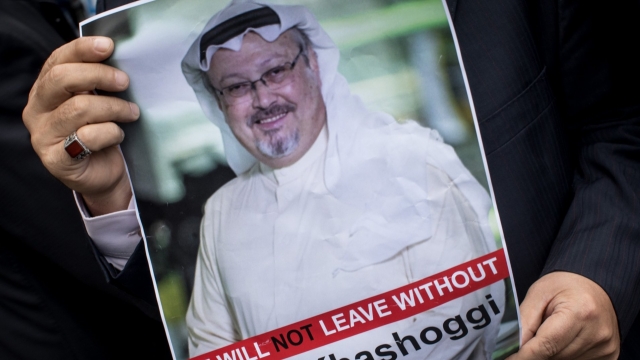 SMS
US Bars Entry To 16 Individuals For Their Roles In Khashoggi Murder
By Katherine Biek
By Katherine Biek
April 9, 2019
At least two of the individuals named by the State Department have connections to Saudi Crown Prince Mohammed bin Salman.
SHOW TRANSCRIPT

The U.S. State Department named 16 individuals on Monday that it said had roles in the murder of journalist Jamal Khashoggi.

That public designation means those Saudi nationals and their immediate family members are now barred from entering the U.S.

Khashoggi was killed during a visit to the Saudi consulate in Istanbul back in October. His body has yet to be found.

The Washington Post columnist was a known critic of Saudi leadership. The Associated Press noted that at least two of the 16 people named by the State Department have connections to Saudi Crown Prince Mohammed bin Salman. The Saudi government's denied the crown prince had anything to do with Khashoggi's death.

Eleven suspects who were arrested in connection with the murder are currently on trial in Saudi Arabia. But those trials are being conducted behind closed doors — so the names of the suspects, the charges against them and all evidence in the investigation are being kept under wraps.