The US Military Has A Satellite Problem 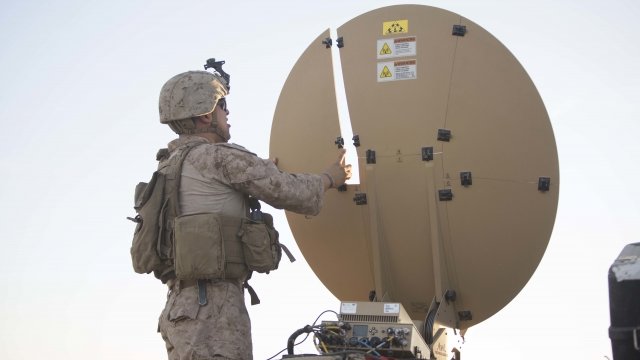 New military technology leans heavily on satellites, but they're inherently hard to defend.

The U.S. has the most dominant military in the world, but recently, experts have been warning that it has a weakness: its reliance on satellites.

Satellites are involved in nearly every military operation: communication, intelligence, radar, drone piloting and even coordinating troop movements with GPS.

He announced the idea during a speech to Marine Corps service members Tuesday.

There are even reports that both countries have tested small, more maneuverable satellites that can directly intercept other objects in space.

And satellites are inherently hard to protect. One national security professor told Politico that a satellite is basically a sitting duck: It's easy to track and can't be hidden.

There are some efforts to make the satellite fleet harder to destroy, like launching lots of backups, but ultimately, the military is relying on deterrence to keep its satellites safe.

That said, if the U.S. did get into an open conflict with Russia or China, analysts fully expect satellite attacks to be one of the opening moves. It's the easiest way for either country to try to shrink America's military advantage.

With that in mind, the military has already begun training troops on how to function if key space-based systems get knocked offline.