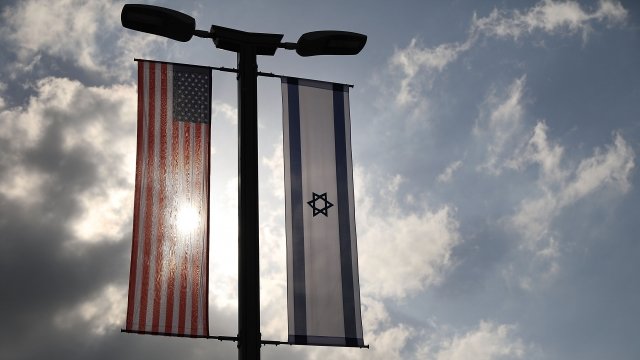 The U.S. Embassy in Israel is moving to Jerusalem in what looks like a major symbolic victory for Israel.

After nearly two decades of stalling, the U.S. Embassy in Israel is officially relocating to Jerusalem.

The move won't change much at first. David Friedman — the U.S. ambassador to Israel — and some of his staff are relocating to what's currently a consular building in Jerusalem. That will be the new temporary embassy until a more permanent location is nailed down.

But the gesture is still hugely symbolic. The Trump administration is throwing its weight behind Israel in one of the world's most contentious land disputes.

From 1949 to 1967, Jerusalem was divided in two: Israel controlled the western part, while the eastern area belonged to Jordan. But Israel has long considered the whole, undivided city as its capital. Israel effectively took over both halves of Jerusalem during the Six-Day War in '67 and passed a law annexing the area in 1980.

That annexation is still controversial: Many Palestinians argue Israel is illegally occupying the eastern part of the city and have called for East Jerusalem to become the capital of a Palestinian state. The official U.S. position has been to leave Jerusalem's status up in the air until broader peace talks can settle the issue, once and for all.

Even with moving the embassy, U.S. officials still say they're not taking a stance on Jerusalem's sovereignty. But Palestinian Authority President Mahmoud Abbas has said the embassy move shows the U.S. is biased toward Israel and can't be trusted to broker peace between the two sides.

It's worth noting Trump isn't exactly alone on this issue. Since 1995, lawmakers from both parties in Congress wanted the U.S. to move its embassy in Israel to Jerusalem.

That was supposed to happen in 1999, but the White House has been putting it off. Democratic and Republican presidents have supported the move but perpetually delayed it to preserve the peace process.

The White House framework for Israeli-Palestinian peace is supposedly still in the works. But the U.S. reportedly hasn't communicated with Abbas since December, when the move was first announced.

The U.S. Embassy is set to officially open on the 70th anniversary of Israel's founding. Palestinians are planning mass demonstrations one day later to mark when they were displaced from the country.