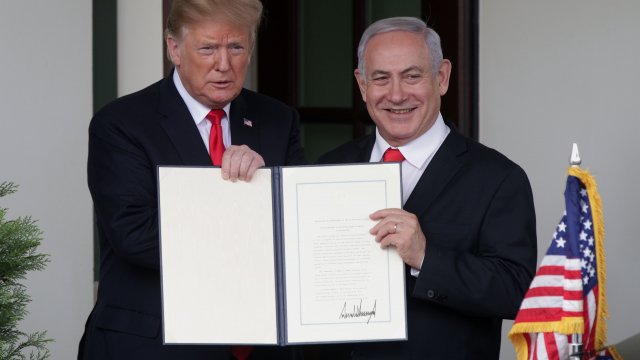 Under President Donald Trump, the U.S. has now both recognized Jerusalem as Israel's capital and Israel's right to own the Golan Heights, which it annexed in 1981. Both moves were pretty big departures from the international status quo.

To understand what makes Israel such a wedge issue between the U.S. and the international community, you first need to follow how the two nations' relationship developed over time.

Relations with Israel and the U.S. weren't always so cozy. President Dwight D. Eisenhower threatened to withhold U.S. aid for Israel if it didn't completely withdraw from the Sinai peninsula in 1957.

Things started warming up under President John F. Kennedy as the Cold War between the U.S. and Soviet Union escalated. As a means of countering Soviet influence in the Middle East, advanced U.S. weapons sales started increasingly flowing to Israel.

Other events brought the nations even closer like September 11, where suddenly Israel became the U.S.'s point person in the war on terror. The relationship has persisted — and has gone even further under Trump.

While other presidents refused to recognize Jerusalem as Israel's capital, Trump made it a campaign pledge. The move was important for both his and Vice President Mike Pence's base.

As for the Golan Heights — Trump claims recognizing it as belonging to Israel helps with countering Iranian influence in the region. But it's also believed to be an attempt to boost Israel's embattled prime minister just before upcoming elections. Both this and recognizing Jerusalem fit with Trump's policy of pulling away from the international scene and moving toward a foreign policy that is more in line with his voting base than the international community.