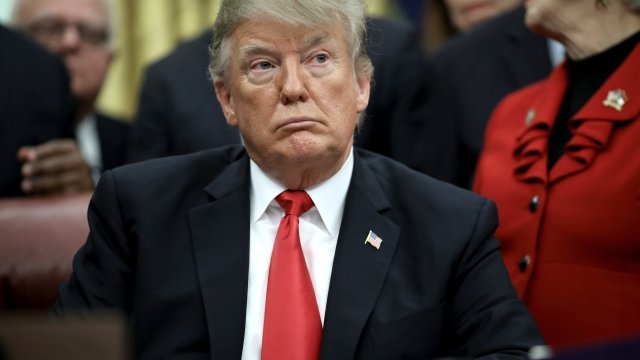 SMS
US National Debt Rises More Than $2 Trillion Since Trump Took Office
By Ahmed Jawadi
By Ahmed Jawadi
January 4, 2019
​Numbers released by the Treasury Department show the country's debt was at nearly $22 trillion at the end of 2018.
SHOW TRANSCRIPT

The U.S. national debt has grown by more than $2 trillion since President Donald Trump took office.

Numbers released by the Treasury Department show the country's debt was at nearly $22 trillion at the end of 2018. According to a report from the Congressional Budget Office, the total public debt increased to 78 percent of America's gross domestic product in the fiscal year of 2018, which is the highest percentage it's been since 1950. The country's deficit rose to 3.8 percent of GDP in 2018, up from 3.5 percent in 2017.

The national debt has been rising at a higher rate in general since Congress and the Obama administration approved stimulus funding in the wake of 2008's financial crisis. But one of President Trump's campaign promises was to "get rid of" the national debt over the span of two-terms.

A "record high" congressionally-imposed debt cap of $22 trillion will be reinstated on March 2, according to the Bipartisan Policy Center. If Congress doesn't act to deal with the debt by mid-summer, the Treasury Department will not be able to "pay all of the government’s bills in full and on time." This would result in "significant costs to the U.S. taxpayer" and will put America's global creditworthiness at risk.