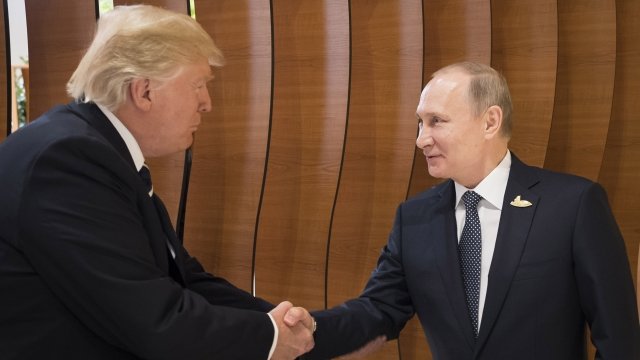 SMS
US And Russia Disagree On What Happened In Trump-Putin Meeting
By Grant Suneson
By Grant Suneson
July 7, 2017
The U.S. and Russia gave conflicting accounts of what happened in the meeting between Presidents Trump and Putin at the G-20 summit.
SHOW TRANSCRIPT

After U.S. President Donald Trump met with Russian President Vladimir Putin at the G-20 summit, both sides said the talks were productive. But they couldn't seem to agree on what was actually said.

But NBC said it received a call from a Trump associate, saying Lavrov's statement was "not accurate."

The U.S. account of the meeting from Secretary of State Rex Tillerson was light on details. He said hacking was brought up but didn't mention what was said about it.

He only said there was a "robust and lengthy exchange" about interference and is unsure if the two nations "will ever come to some agreed-upon resolution" about it. 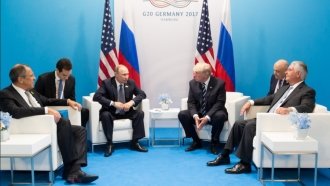 Trump And Putin Meet For The First Time As World Leaders

Putin has consistently denied interference, saying maybe some Russians acting alone did it. But it's tough to know what Trump actually believes.

Trump's spokespeople have said he recognizes Russia meddled in the 2016 election, but Trump doesn't appear to be sold on it.

In June, Trump tweeted that the hacking was a hoax, but later that day, White House spokeswoman Sarah Huckabee Sanders said Trump "thinks that it probably was Russia."

Some more recent tweets seem to imply that he believes Russia interfered, but they mostly focus on former President Obama's response to the hacks.

While in Poland recently, Trump said the interference "could" have been Russia, but said other countries might have done it and that "nobody really knows for sure."

He also cast doubt on how much of a consensus there is about it among U.S. intelligence agencies. All four agencies that investigated election meddling said they had "high confidence" that Russia interfered on Putin's orders.