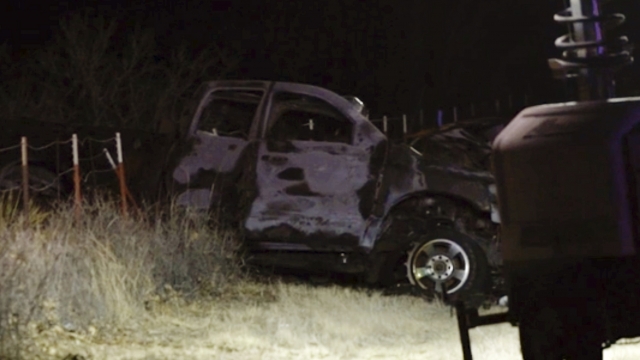 Nine people died in a fiery, head-on collision in West Texas, including six students and a coach from a New Mexico university who were returning home from a golf tournament, authorities said.

A pickup truck crossed the center line of a two-lane road in Andrews County, about 30 miles east of the New Mexico state line on Tuesday evening and crashed into a van carrying members of the University of the Southwest men's and women's golf teams, said Sgt. Steven Blanco of the Texas Department of Public Safety.

Six students and a faculty member were killed in the crash along with the driver and a passenger in the pickup truck, Blanco said. Two students were taken in critical condition by helicopter to a hospital in Lubbock, about 110 miles to the northeast.

Family members confirmed freshman Laci Stone was among those who died in the crash. Stone graduated from Nocona High School in Texas in 2021, where she played golf, volleyball and softball.

"She has been an absolute ray of sunshine during this short time on Earth," her mother, Chelsi Stone, said on Facebook. "… We will never be the same after this and we just don’t understand how this happened to our amazing, beautiful, smart, joyful girl."

Laci Stone was majoring in global business management, according to her biography on the golf team's website.

The National Transportation Safety Board will send a 12-member "go team"  to the crash site, including experts in human performance, vehicle and motor carrier factors and accident reconstruction, agency spokesman Eric Weiss said. The team is expected to arrive late Wednesday afternoon or early evening, he said.

"We’ll try to find out not only what happened, but why it happened, so we can possibly prevent things like this from happening in the future,"  he said.

The University of the Southwest is a private, Christian college located in Hobbs, New Mexico, near the state’s border with Texas.