University Of Chicago Building Cancer Center To Serve South Side 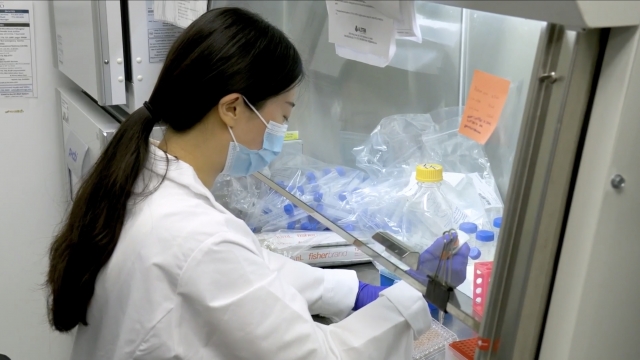 SMS
University Of Chicago Building Cancer Center To Serve South Side
By Lauren Magarino
By Lauren Magarino
April 18, 2022
UChicago Medicine now estimates about 56% of patients on the city's south side must leave the area to get health care.

Body builder Erica Langley is a pro at pushing past pain. And she's got the trophies to prove it.

"You prepare for a minimum of 12 weeks and you're on stage maybe 10 minutes," she said. "But, you know, Usain Bolt said he trains four years for what, nine seconds? So kind of puts it in perspective."

It's her life passion that later became her life saver.

"I had recently lost quite a bit of weight because I was preparing for a bodybuilding competition, Langley continued. "So, had my breasts been fuller, as they normally were, it's probably something I never would have noticed."

In 2018, Langley noticed something odd.

"As I examined myself, I found a lump that was about the size of a peach pit on my left breast. The odd thing was, it was on the underside of my breast. So if you're looking at me head on, you wouldn't notice it," she said.

A week later, a doctor diagnosed Langley with breast cancer.

The CDC says that every year, 1.6 million Americans are diagnosed with cancer.

Despite a 27% drop in national cancer death rates over the past 20 years, cancer is still the second-leading cause of death in the country.

And on the south side of Chicago, where Langley lives:

"The cancer rates in south side Chicago are almost twice the national rate, which in our view, is unacceptable," University of Chicago Comprehensive Cancer Center Director Dr. Kunle Odunsi said.

"It highlights, I guess, the disproportion of wealth distribution even just within the city," Langley said. "It's reflective of the resources that are put into the south side versus other parts of the city."

Historically, health care resources have shrunk on the south side. Most notably, the University of Chicago Medical Center shut down its trauma center in 1988. Years after it shuttered, so did the last-standing trauma division in the area. The south side suffered 27 years without a trauma center. And after years of protests, UChicago Medicine reopened theirs.

UChicago Medicine now estimates about 56% of patients on the south side must leave the area to get health care. And, for cancer needs alone, 67% of residents seeking inpatient care leave the south side.

"A lot of people often have a debate with themselves," Langley said. "'Do I go outside of my own community to get really good health care, which could be a struggle? Or do I go someplace that's closer that I know I can get to and from, but I might not get the the care that I want?'"

Langley chose to stay put and sought care with UChicago Medicine. Twenty weeks of chemotherapy, one double mastectomy, one reconstructive surgery and 50 pounds later, Langley returned to the gym in 2020. Within six months, she transformed.

"In particular, the first one was my big 'F you' to cancer. It literally was. So it was important for me to incorporate the breast cancer ribbon," she said.

Langley competed in four categories, winning 1st place at her best. Her lowest ranking was only 4th place.

It's a success story UChicago Medicine wants to see more of, by building a 500,000 square foot cancer center.

"So it's just a parking lot right now, but give it about four years and $633 million and Chicago will have its first free-standing cancer center in the city," Odunsi said.

"This is one of the cancer center lab spaces where we conduct research," Odunsi continued. "When we do our research, we don't do it in a vacuum. We pay attention to what are the what are the most prevalent cancers in our community so that we can specifically focus on those challenges and use it to help our patients."

There are still a few hurdles UChicago Medicine needs to clear. It needs to receive regulatory approval for construction and it needs to earn community trust to help folks, like Langley, not only push past the pain but come out stronger.

"I have never seen such a renewed commitment," Odunsi said. "So, there's significant commitment by the university, by the medical center, by this institution to really aggressively tackle some of these challenges. Some of the challenges faced by our south side community."