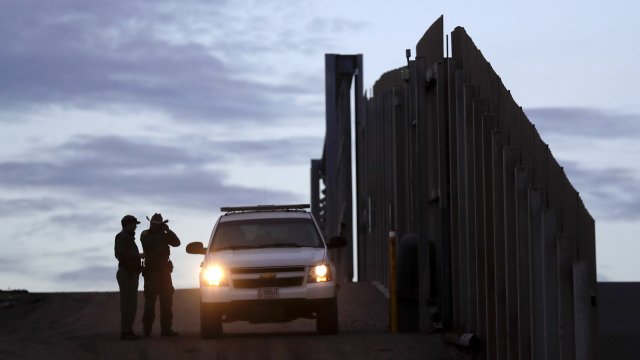 As migration at the border swells, as many as 1,000 people a day are crossing into the U.S. without being caught, the border patrol union tells Newsy.

For U.S. Border Patrol, the term "got aways" refers to migrants who are able to sneak into the country without being identified or apprehended.

"Right now we have about 6,000 people that are crossing our borders illegally every single day. Of those 6,000 — 1,000 of them are getting away," says Brandon Judd, president of the National Border Patrol Council.

Judd says though agents have never been able to detain everyone at the border, he's never seen that many people evade capture before.

"We have no idea who they are. We don't know what threat they pose to the American public," he says.

"They're not crossing undetected. These are 1,000 people that are, in fact, detected. We just weren't able to apprehend them."

Like in this Customs and Border Protection video, Judd says smugglers often abandon kids and families in strategic areas to overburden agents and create gaps elsewhere.

Judd has been in the Border Patrol for over 20 years and speaks on behalf of around 18,000 officers. He was a supporter and close ally of President Donald Trump.

Now, he's a vocal critic of President Biden's policies, which he blames for the migration surge.

"He says that there are surges every year. That's true to some extent. But we've never seen a surge day over day, week over week, month over month increase like what we're currently seeing right now," Judd says.

New official data shows the U.S. arrested and detained over 172,000 migrants at the southern border in March, a 15-year high — and a 71 percent increase from February.

While most migrants were swiftly expelled under a pandemic emergency policy, a soaring number of unaccompanied minors and families with young kids have been allowed to stay in the U.S. under supervision.

"It's inhumane to give this perception, which then becomes reality that our borders are open, that you're going to get released into the United States. And as long as we continue to have that perception, people are going to come and they're going to try to cross the border illegally," Judd says.

The Biden administration says the border is not open and it's doing its best to expel as many migrants as possible while rebuilding the immigration system it says was dismantled by the Trump administration.