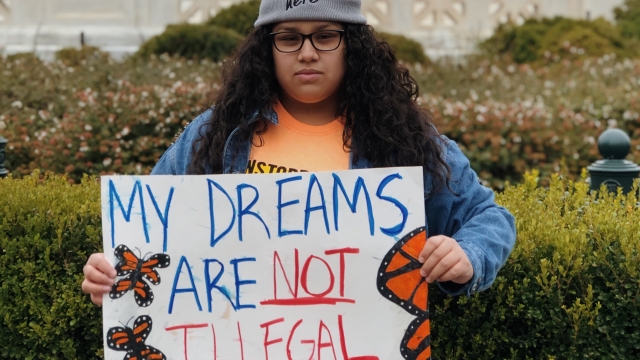 SMS
Undocumented Immigrants: President Biden's Bill Would Be Life Changing
By Ben Schamisso
By Ben Schamisso
February 24, 2021
Many Republicans strongly oppose immigration bill that would give most undocumented immigrants a path to citizenship.
SHOW TRANSCRIPT

"Having a pathway to citizenship would open up opportunities for me that have been closed my entire life."

"One thing that will definitely change is the fear that I have going outside and just being in front of ICE or CBP."

Andrea Anaya and Morelys are among millions of undocumented immigrants who would qualify for a roadmap to citizenship under President Biden's sweeping immigration bill.

The bill's future is uncertain — with many Republicans blasting it as a self-serving effort to legalize those who broke the law and an incentive for more illegal immigration.

"It's about getting as many new voters on the books for 2024. They think it helps them politically. That's why they're willing to sacrifice national security, sovereignty and economic well being to get there," said Mike Howell, a former Homeland Security official in the Trump administration.

Still, impacted immigrants want people to know how the bill could change their lives.

"The small things that people that are citizens just don't really think about, the stuff that would mean the world to us: having a job, being able to go get your license," said Anaya.

She moved to the U.S. from El Salvador with her mother when she was five.

Because she was brought to the U.S. as a child, she would immediately qualify for a green card under Biden's plan — and could seek citizenship three years later.

"I want to work in public policy, possibly law school, become a lawyer. All of those things require me to have status. So I'm hoping that by that time there's a solution," Anaya said.

The fast-track option would also be available for farmworkers and those with temporary protected status.

Other undocumented immigrants would be allowed to work in the country after passing background checks and filing taxes. Then, they would be placed on an eight-year citizenship track.

"Being a citizen of this country will make it much easier, much better for me and my family," said Morelys.

She came to the U.S. on a tourist visa when she was 15 to join her undocumented mother in Maryland — and to stay away from an abusive household in Spain.

She overstayed her visa and has been living in the U.S. illegally for the past three years. She says gaining legal status would greatly help her family's financial situation. She asked us not to use her last name.

"My mom is a single mom. She does not receive child support or any help from the government," she said.

Besides creating citizenship avenues for undocumented immigrants already in the country, the bill would increase legal immigration, add resources to speed the processing of asylum seekers and invest in Central American nations.

Because immigration reform has failed many times in the past, the White House says it is open to splitting up the bill into more targeted legislation — if that helps bring Republicans on board.