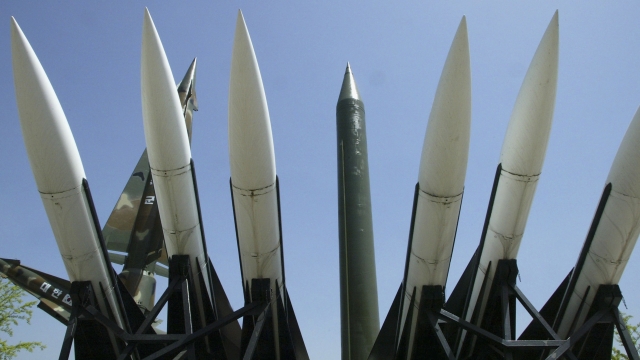 SMS
The UN Voted To Start Talking About A Treaty To Ban Nuclear Weapons
By Briana Koeneman
By Briana Koeneman
October 28, 2016
During the vote, 123 nations said they were in favor of the resolution. But the U.S. wasn't one of them.
SHOW TRANSCRIPT

The United Nations voted Thursday to start talks on a treaty that would ban nuclear weapons.

A total of 123 nations said they were in favor of the resolution — an overwhelming majority.

Thirty-eight countries were opposed, and 16 abstained.

Now, the measure will go to a full General Assembly vote in December.

The goal is to set up a conference in March to negotiate a "legally binding instrument to prohibit nuclear weapons, leading towards their total elimination."

That deal would ban countries from manufacturing, possessing, stockpiling or using nuclear weapons.

Support for the treaty has been gaining steam during the past few months of negotiations.

Mexico, Brazil, Ireland, Austria, Nigeria and South Africa have been the main proponents behind the resolution, and many other countries have since followed suit.

But the nine known nuclear-armed nations — including the U.S., U.K. and Russia — still have no interest.

The Obama administration has firmly expressed its opposition to the resolution, citing security concerns.

The U.S.'s special representative to the U.N.'s Conference on Disarmament said earlier this month, "How can a state that relies on nuclear weapons for its security possibly join a negotiation meant to stigmatize and eliminate them?"

But the U.S. does support the nuclear non-proliferation treaty, which would stop countries from becoming nuclear and limit the creation of new weapons instead of banning them entirely.