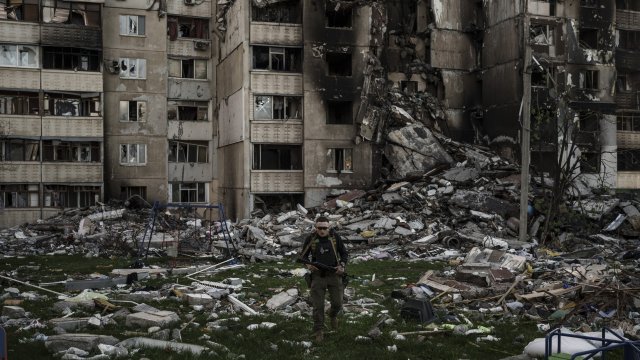 SMS
Ukrainians Push Harder Against Russia As Third Month Of War Begins
By Jason Bellini
By Jason Bellini
April 25, 2022
Both Ukraine and Russia have been increasing their artillery strength as the war continues.

Russia recently released video of a powerful Iskander missile launcher that it claims is now inside Ukraine.

But at the start of the third month of a war where Ukraine has devastated Russian units, the fear factor cuts both ways.

Now both sides are preparing for a brutal and bloody war of attrition.

On the eastern front, the Ukrainians are fighting back.

"Our artillery is very effective because it can hit them from a big distance," says a Ukrainian fighter. "They are scared of it, 100%. They used to feel much safer."

Ukrainian forces are also digging in by creating huge trenches around the eastern city of Zaporizhzhia.

A Ukrainian military leader says these fortifications are meant to "save the lives of our soldiers" as they defend the city.

It’s another sign of the reality setting in — that this is a nasty, brutish stage of the war that could also be long.

The destruction includes critical infrastructure that Russia once hoped to control but instead now tries to destroy, as evidenced by Russian strikes Monday on five railroad stations in the central and western parts of the country far from the front lines.

The front line now extends 300 miles — not just in the east, but to the two major cities on the sea. In Mariupol, Ukrainian forces released video they say is of the 1,000 civilians — many of them children sheltering under the vast steel mill pounded by Russian bombs.

The head of those forces is pleading for safe passage, saying they cannot hold out much longer, and now there are fears that Odesa could be the next Mariupol after Russia struck apartment buildings on Easter. One father posted a photograph of his wife and 3-month-old baby killed in the strike.

President Zelenskyy is responding with anguish and anger.

"Among those killed was a 3-month-old baby girl," Zelenskyy said. "How did she threaten Russia? It seems that killing children is just a new national idea of the Russian federation. We will identify all those responsible for this strike. Those responsible for Russia's missile terror... Everyone who gives these orders, everyone who fulfills these orders — no one will be able to hide."