Ukrainians In Oklahoma Pray For Their Families, Peace In Their Home 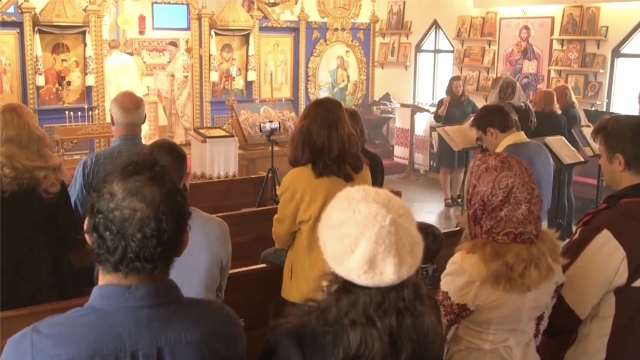 Ukraine may be thousands of miles away from one small Orthodox church in Jones, Oklahoma, but people there are thinking about their families back home in Kyiv, Lviv and other Ukrainian cities being shelled by Russian forces.

Olena Nesin calls one small church in Jones home, along with 65 other parishioners.

“I have my parents, they live in Dnipro City, and my brother lives in a more dangerous place called Bucha, near Kyiv," Nesin said.

Nesin prayed for her family at Saint Mary’s Orthodox Church's Sunday service right after the beginning of Lent. She has been texting and calling them, urging them to leave the city.

“My parents call my brother twice a day because where my brother is there is always fighting, always shelling," Nesin said. "There is no way to evacuate people at this point.”

Others also lit candles and said prayers for their parents, sisters and brothers — some of whom are going to stay behind and fight against the Russian army, like Andriy Yabluchanskiy’s family.

"The building that I lived in have been has been attacked, the building across my building," Yabluchanskiy said. "This a large apartment complex. This is how people live in Ukraine. In the big cities... they they were attacked. Missiles hit the buildings, basically, there is a lot of damage to civilian structure."

Ukrainians immigrated to Oklahoma in 1901. Many were farmers in the small, rural communities of Jones and Harrah, northeast of Oklahoma City. The first Ukrainian Orthodox church was built in 1919 but burned twice before a new, concrete structure was completed in 1950.

One day, the liturgy focused on forgiveness, with Father Raphael saying it was important for people to pardon others for wrongdoing they’ve committed.

But Nesin and Yabluchanskiy said despite what the Bible teaches, they find it hard to forgive what is happening in Ukraine right now.

"It’s very difficult," Nesin said. "I just don’t know what to tell. I try to think these are people — brother going against a brother.”

Despite the heavy toll the war has taken on Ukraine so far and despite the casualties, they still both have hope.

"It's very hard to to foresee the future," Yabluchanskiy said. "As I said, I can, I can only hope for something. I hope that my country state stands and it doesn't fall. As of now, there is a major resistance. Obviously, the expectation was that the war will be three days war."

“I believe Ukraine win," Nesin said. "Ukrainian nation is so strong. Ukraine has been in this situation with Russia for the past eight years, and they know they cannot surrender.  If they surrender, they won’t exist anymore."

For now though, they and others that attend the small church on the edge of the prairie will continue to pray for their families and Ukraine.