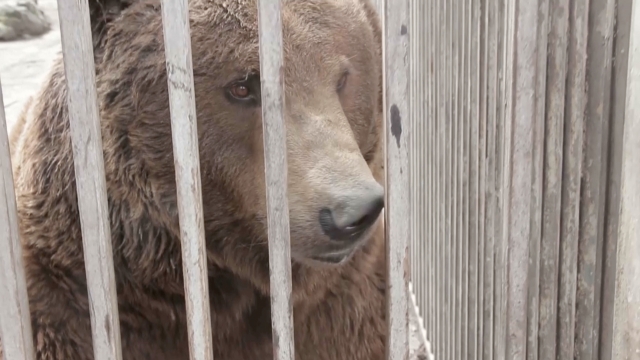 SMS
Mariupol Zoo Animals Caught In Crossfire Of War
By Isbella Diaz
By Isbella Diaz
April 27, 2022
Private zoo owner Savely Vashura and his staff make sure every animal, big and small, is looked after as war wages on around them.

As deadly shelling rains down on Mariupol, evacuation of the people living there remains difficult.

Animals are stuck there too. They're either too big or too risky to move as bombs fall.

The people who care for them are left with few options. Savely Vashura, who is the owner of a private zoo, never left the city. Day after day, he and his staff make sure every animal, big and small, is looked after.

"When there was shelling, we fed them and gave them water to drink," Vashura said. "We didn't leave them without (food) for one day. We would pick the moments (to feed them)."

One problem is keeping the animals fed. But the bigger issue is safety. And not every animal can be saved.

"When shells fall nearby, people would jump to the ground," Vashura continued. "But we had no one killed. Apart from the animals, no people died."

More than a dozen animals at the zoo have died so far. The owner says the good news is the worst of the shelling has passed, at least for now.

"It is more or less stable, but they still fire and hit (the city)," Vashura said. "Just three days ago, a shell struck right beside the zoo."

Now, a site that once was a place of joy has become a scene of war and uncertainty.

As for the zookeepers, they stay on, watching the everyday miracles still around them like a new litter of raccoons. It's a small glimmer of hope as war rages on around them.