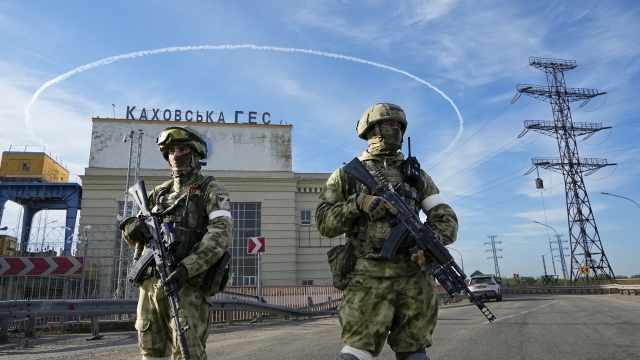 The withdrawal marks a major victory for Ukraine, though Moscow maintains control of about 70% of the region and still considers it Russian territory.

Ukrainian troops are preparing to enter the southern city of Kherson after Russian forces retreated across the Dnieper River, a spokesperson for Ukraine’s military intelligence agency said.

Andriy Yusov told The Associated Press that “an operation to liberate Kherson" and the surrounding region of the same name was underway Friday.

“But it will be possible to talk about establishing Ukrainian control over the city only after an official report by the General Staff” of the Ukrainian army, Yusov said.

President Volodymyr Zelenskyy has warned that the Russians were feigning a pullout from Kherson to lure the Ukrainian army into an entrenched battle.

Videos posted on social media showed a Ukrainian flag flying in a central square for the first time since early March, when the city was seized by the Russians. Kherson was the only regional capital captured by Russian forces after they invaded Ukraine in late February.

Russia said its troops finished withdrawing Friday from the western bank of the river that divides Ukraine’s southern Kherson region, allowing Ukrainian forces to move cautiously toward reclaiming the country's only Russian-occupied provincial capital in what would be a major victory.

In a statement carried by Russian state news agencies, Russia’s Defense Ministry said the withdrawal was completed at 5 a.m. and not a single unit of military equipment was left behind. The retreat, which came two months after Russian forces withdrew from eastern Ukraine's Kharkiv region, represents another huge setback for Moscow in its 8 1/2-month war in Ukraine.

Kremlin spokesman Dmitry Peskov on Friday said Moscow continues to consider Kherson as part of Russia despite the troop withdrawal, and rejected the notion that the retreat is humiliating for President Vladimir Putin.

He added that the Kremlin doesn’t regret holding festivities just over a month ago to celebrate the illegal annexation of Kherson and three other occupied or partially occupied regions of Ukraine. Despite abandoning their positions on the western bank, Russian forces still control about 70% of the Kherson region.