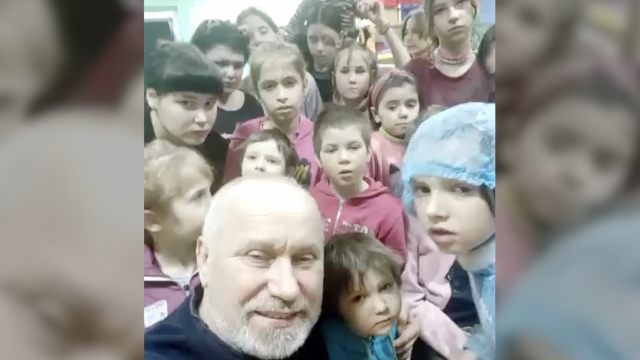 SMS
Ukrainian Orphanage Trying To Keep Children Safe Amid Russian Invasion
By Jason Bellini
By Jason Bellini
March 2, 2022
Vladimir Sagaidak is doing his best to make the 50 children at an orphanage in Kherson feel safe as Russia continues to attack Ukraine.

The zoom call goes in and out, but what is clear is that an orphanage in one of the most beseiged cities in Ukraine — Kherson — is doing its best to make the children feel safe. All 50 of them. They range in age from 3 to 17 years old.

Vladimir Sagaidak is the man in charge. His daughter, Kate Fateeva, is on the call from a different location in Kherson as she translated.

"They are afraid of war, but they're happy when they are with my father and his colleagues. They are always happy," Fateeva said.

Happy, despite the sunlight blocked out.

"They closed to the windows to be in safe," Kate continued.

And to prevent light through the windows from attracting the attention of Russian soldiers.

NEWSY'S JASON BELLINI: Do you think that they are in a lot of danger?

KATE FATEEVA: Yes, of course. All our country is in danger. We can't do anything because we are circled by Russian soldiers.  We are just blocked and always bombed.

Russian troops began moving on Kherson in the pre-dawn hours of Feburary 24, eventually surrounding the southern seaport near the Black Sea. The city has been under constant bombardment since.

"There are a lot of military Russian machines and two or three kilometers there are rockets," Fateeva said.

Sagaidak says he and two teachers are the only ones looking after all these children.

"Because the rest couldn't get to work because of army, war," Fateeva continued.

Fateeva, now speaking for herself, says that with the Russian advance on the city, there's no way to escape.

"I know that a lot of father's foreign friends want them — to take these children to Poland, to Italy, to America," she said. "It's very dangerous because they may be killed, really."

Sagaidak says, at the sound of explosions, he moves the children down to the basement of the orphanage.

BELLINI: Why did you not leave before before the bombing started?

FATEEVA: We didn't expect it would be so aggressive.

BELLINI: Is there anything people around the world right now can do to help you?

FATEEVA: It is a peace.

Peace — for children without parents in a city under siege.

The mayor of Kherson has said he is "waiting for a miracle."