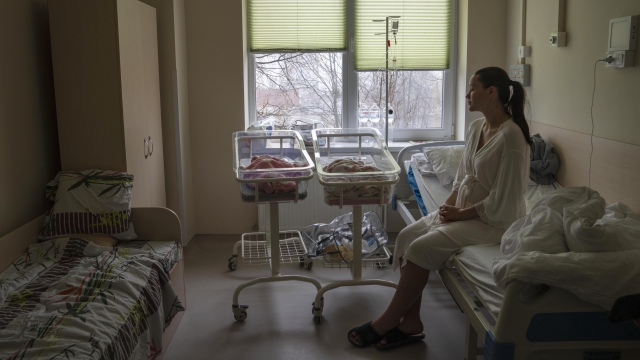 Civilians all across Ukraine have faced the brunt of Russia's invasion from air strikes to alleged war crimes. Pregnant mothers, especially.

A quiet moment amid raging war as Natalya Suhotsha rocks her newborn twins — both girls.

She's far from her home in the outskirts of Kyiv, here in this hospital in the relative safety of Lviv in western Ukraine.

"We (managed) to get out (on the first or second day of the war) because no (Russian) soldiers were there. They just came in the sky. But after five days, my friends wanted to go home, to another place from Irpin and they 'pouf pouf' to them (shot at them) towards their cars, their babies, their homes, everywhere," she said.

Outside the maternity ward, there are sandbags piled high.

Inside, there are heavily pregnant women, forced to bend low to avoid water pipes. A delivery table is set up in the basement in case a baby arrives during an air raid.

"Some babies are really premature because women are stressed," Lviv Municipal Maternity Hospital Natal Department Chief Lilia Myronovich said. "Especially ladies which came from other districts. It was very hard to move to our town. That's why sometimes we have complicated deliveries and cesarean section."

Ukrainian soldiers are still defending their country, even as new evidence of Russian war crimes emerge.

There's the aftermath of what was a civilian convoy of people trying to leave Kharkiv.

About a mile away, Ukrainians released a video, showing their forces using a Swedish-made grenade launcher to take out a state-of-the-art Russian tank.

And on Snake Island, a strategically important rock in the Black Sea, Russians are dying 11 weeks after seizing it.

This Russian helicopter blown up presumably as it tried to rescue Russians wounded in strikes like those.

Russian ships are not safe either. They're targeted by Ukrainians using powerful drones.

Military analysts say Russian forces are fractured, even in the areas they're focusing on in eastern Ukraine.

Ukrainians are increasingly on the offensive, helped by western military equipment. The latest to arrive have more range and better accuracy.