Ukrainian-Americans Turn To One Another While Russia Wages War 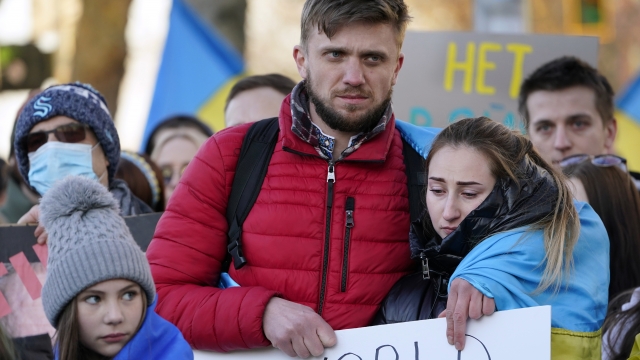 Another day of heartache for Ukrainian-Americans.

"I'm sad. I'm angry. I try not to panic," said Oleg Hiay, who has family in Ukraine.

"They're not evacuating yet. Some friends are staying there and they're saying that they're gonna mobilize. Do whatever it takes," said Lasiy Chuk, who also has family in Ukraine.

In Ohio, prayer services for orthodox Christians with a lot riding on faith.

"Our relatives are not sleeping right now. Even [when] it's night,"

In Kansas, Nataliya Borth is fighting to keep her family alive in a war zone.

"I felt so helpless," she said. "It's such a burden when you know somebody you love so much and you care and there's absolutely nothing I can do."

It's the same feeling for Igor Salamatin in Utah whose mom, dad, brother, aunt, uncle and cousin are packed into a single car trying to get to Romania in hopes they can get on a flight for the U.S.

"I can't go there and physically move them across the border," he said. "Also I have fear that if my dad gets drafted, then my mom and my brother won't be able to leave."

In Virginia, tears for the birthplace Ruslana Remmenikova knew might one day be vulnerable to this.

"I was born there," she said. "My people are so loving and peaceful and innocent and this is obviously a power move."

In Florida, Lyuba Stelmkh's cooking is imbued now with every ounce of fear written all over her face.

"I have my mother, all my family over there; My grandchildren, my nieces, everybody over there," she said. "I don't believe it. This is like a movie, scary movie."

Back in Ohio, there's talk of how to send aid, be it money, food, something; A tangible token of the faith and the hope that may make a difference even from this far.

"Hopefully we'll come up with some kind of solution so that we can say that we did something and were not just bystanders," said Andriy Voyetskiy, whose family is in Ukraine.