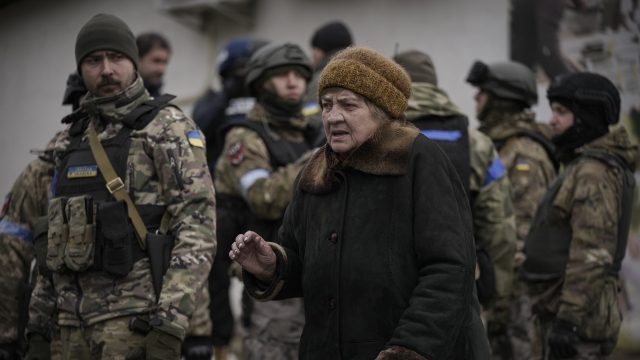 Ukraine's deputy prime minister says 765 residents managed to make it out of Mariupol in private vehicles on Saturday while a team a humanitarian workers has yet to reach the hard-hit city.

Iryna Vereshchuk said the residents reached Zaporizhzhia, a city 140 miles to the northwest.

Meanwhile, the International Committee of the Red Cross said a team with three vehicles and nine staff members had planned to get into Mariupol, scene of some of the war's worst attacks, on Saturday to evacuate residents. The Red Cross said it could not carry out the operation Friday because it did not receive assurances the route was safe. City authorities said the Russians blocked access to the city.

A spokesperson for the International Committee of the Red Cross said Saturday evening the team, which departed Zaporizhzhia in the morning, was "spending the night en route to Mariupol and are yet to reach the city." Around 100,000 people are believed to remain in the city on the Sea of Azov, down from a prewar population of 430,000, and facing dire shortages of water, food, fuel and medicine.

The Mariupol city council said earlier Saturday that 10 empty buses were headed to Berdyansk, a city 52 miles west of Mariupol, to pick up people who managed to get there on their own. About 2,000 made it out of Mariupol on Friday, city officials said.