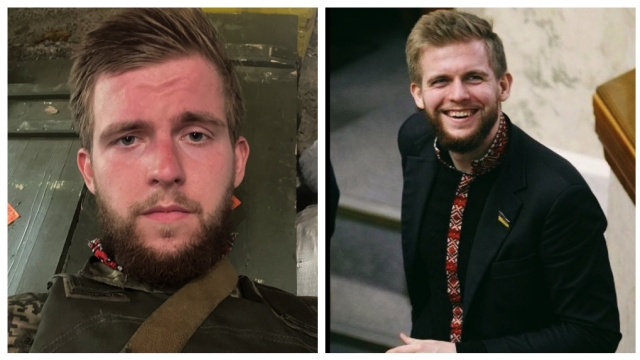 Private Sviatoslav Yurash is a frontline soldier trying to hold the line against the Russians.

"As a private, you await your orders," said Yurash.

Yurash is one of tens of thousands of young Ukrainians who have answered the call of duty. But it's not his only duty to Ukraine.

At 26 he is also the youngest ever member of his country's parliament.

With shells exploding around his trench he's multitasking, doing international diplomacy or recording a message to a British lawmaker.

"We are thankful as we can be for all that you have done for us," he said.

In between trips to the front, Yurash sat down with Newsy in the capital, Kyiv.

NEWSY'S JASON BELLINI: Did you have military experience before this?

SVIATOSLAV YURASH: No. You learn pretty fast when you just survive. When you are fighting for your life, you have no other choice.

BELLINI: What's your function when you're right there in a trench? What are you trying to do?

YURASH: You patrol, dig and shoot. You carry a great deal. You support. You try and bring the wounded away from the frontlines. You are there to defend against the Russian onslaught.

Yurash joined a battalion in the early days of the invasion, a part of the bloody defense of the capital.

He then fought this summer holding the line against the Russian army in the heavily contested eastern Donbas region.

BELLINI: Don't you have wartime duties as a member of parliament that you can't fulfill while you're out on the front line?

YURASH: That's why I'm here now, to fulfill those duties. We have the ability to communicate. We thank Elon Musk as well.

Yurash's break from fighting is no break from reminders of war, like the air raid sirens that suddenly interrupted the conversation.

YURASH: The chance of a missile hitting you right here is pretty negligible.

BELLINI: The risk factor is a bit higher on the front line than it is here in Kiev.

YURASH: Well, you have no reason to ignore what warnings come. 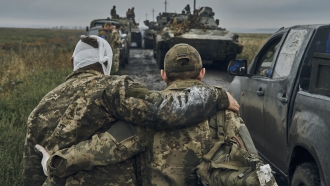 As Ukraine tries to build on the success of its surprise lightning strike in the north, the president who Yurash helped get elected warns that the most deadly days of the war may be yet to come.

BELLINI: Have you made peace with the very real possibility of dying on the front line?

YURASH: Every single Ukrainian you meet has already taken one way or the other a great loss, and because of that, your desire to get justice for all of them is bigger than whatever your concern for your own life is. And when I'm there, that desire and need to get justice is realized in no other way. It's justice that we need for all those people who have perished in the struggle for our country's existence.

BELLINI: And you're prepared to die for that?

YURASH: Well, I don't want to die, but when you join the army, that is a very real possibility.

BELLINI: Have you had any close calls yourself?

YURASH: Yes, plenty. Plenty. You get used to shelling. You get used to the horror of it pretty quickly. You have no choice. Humans are very malleable to whatever horror or joy comes to them. But what sticks out is camaraderie. One of my comrades has been hit pretty hard. Shrapnel hit him basically in the leg, torso, arm and face. And we were essentially carrying him out of there. And you had all these people basically tending to him and trying to take him into safety. One of the most honorable things I can think of doing is saving a man's life like that. And to try to be useful in saving somebody from hell on the battlefield and giving him a new lease of life, because that's what I would hope would happen to me if I would have gotten hit.

Thousands of Ukrainian soldiers have already died in the more than 200 days since Russia invaded Ukraine.

BELLINI: You're going to be going back to the front?