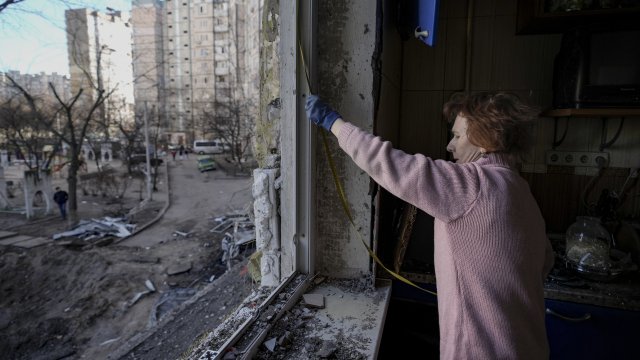 About a month into Russia’s invasion of Ukraine, the devastation on the ground is searing.

Hundreds of civilians have been confirmed dead, and rubble is visible as far as the eye can see.

The U.N. is now warning that up to 90% of people in Ukraine could fall into poverty if the war continues.

“It’s 18 years of socioeconomic progress that is basically being erased should the war continue and deepen," said Gerd Trogemann, manager of the United Nations Development Program's regional hub for Europe.

“It’s access to every form of everyday life that is either hampered or become totally impossible for people on the ground," he said.

According to the Ukrainian government, at least $100 billion worth of infrastructure has already been obliterated — things like buildings, roads, bridges, hospitals and schools.

Russian airstrikes have also cut off water and electricity for tens of thousands of people. Experts say that can unleash contamination and infectious disease.

There are also long-term health and environmental risks associated with the aftermath of Russian bombs.

“We're trying to keep track of this together with the government and with the U.N. partners on the ground using satellite imagery, using social media tools," Trogemann said.

The employment picture is just as dire.

Ukrainian officials say half of all businesses have been forced to permanently shut down, with those still in business hanging by a thread.

Without a solid plan to help Ukraine rebuild itself, experts say it could become a failed state and possibly a magnet for trafficking, terrorism and other illicit activities.

“Rwanda is a good example," Qian said. "The Hutus got aid, the Tutsis got aid; everyone got aid because they were starving, so that's going to be a hard question for the west and for aid donors, if it comes to that."

Qian praises the U.N. for bringing attention to Ukraine’s current and future needs before people move on.

“Once the conflict is over, sometimes we forget about them, and so it's good to talk about this now when people are charged up, motivated and willing," Qian said.