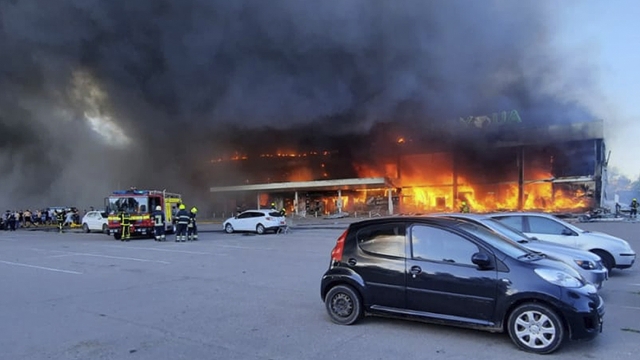 SMS
Ukraine Receives Same Defensive System That Protects The White House
By Jason Bellini
By Jason Bellini
June 27, 2022
The U.S will send Ukraine an advanced missile-defense system that can hit 72 targets at once, says a Biden administration official.

It may be one of the deadliest attacks on civilians of the war thus far. The number of dead are reportedly growing as rescue workers dig through the rubble.

A Russian missile hit a shopping mall in Kremenchuk, a city far from the front lines.

Pesident Volodymyr Zelenskyy said, in a post on telegram, that 1,000 civilians were inside and that “it is impossible to imagine the number of victims.”

The city’s mayor wrote on Facebook that he’s 100% certain that that this area had no links to Ukraine’s military.

Emergency workers are racing to get under the debris to find survivors — in a scene reminiscent of just one day earlier.

At least one Russian missile struck the capitol of Kyiv in the dawn hours Sunday, hitting, according to the city’s mayor, at least two residential buildings.

Zelenskyy said the attack killed a 37-year-old man and injured his wife and young daughter. Her rescue from the partially collapsed building was captured in video and photos from the hospital.

Ukraine’s Air Force says the buildings were hit by cruise missiles fired from warplanes over the Caspian Sea, more than 900 miles away.

The attack on the capitol where Zelensky has remained throughout the war comes as a Biden administration official says the U.S. will send Ukraine an advanced missile-defense system that can hit 72 targets at once.

"This is a ground-launched version of an air-to-air missile, that is linked to a ground radar and together they provide defenses against aircraft and cruise missiles," Cancian said.

The NASAMS system’s defensive capabilities hold an important, if not-well-known role in the U.S.

"It's used, its really just in one very specialized function in the United States and that's to protect the White House," Cancian said.

That same protection is now being offered to Ukraine’s capital and its President.