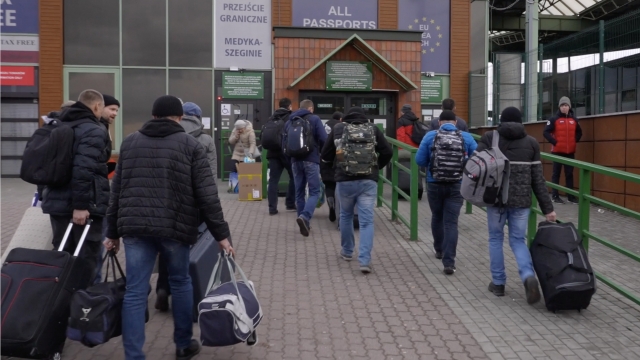 Ukrainians are returning to their country, answering the call to come and fight.

A Polish government bus just carried women and children away from the border while the men headed toward it.

"The president officially invited mercenaries and anyone that wants to come," one man said.

One man, who asked not to be identified by name for security, is referring to Ukrainian President Volodymyr Zelenskyy's formation of "The International Legion of Territorial Defense of Ukraine."

It's an open invitation to anyone who wants to come and fight the Russians.

Ukraine's embassies around the world are echoing the message, acting as de facto recruitment centers.

The government directives say there is no military experience required — just bring body armor, gloves and eye protection if you have them.

As women and children pass in one direction — without the fighting-age fathers, sons and brothers left behind — the military volunteers head toward Ukraine.

One group wants Newsy to know they are Ukrainian, even though they're coming from other countries, like Germany.

"I'm going back home," another man said. "In such moments, staying in Poland and doing nothing is just ... Every healthy man should defend their country."

After seeing Zelenskyy appearing in public in the war zone, he changed his opinion and now says he's "very glad that we have such a president. A president that vows to fight to the death."

When Newsy asked some of the men if they were scared or nervous, they responded: "We are not afraid because it will all be over with soon."

But the war is likely far from over and many more refugees are expected.

More than half a million have left so far, according to the U.N. Two hundred thousand of them arrived in Poland.

According to officials, it's now taking at least 70 hours to enter Poland at the Medyka border crossing.

Luba Barcz has been waiting for her daughter and grandchildren since last Friday. They've been stuck waiting on the Ukrainian side of the border.

Barcz says her daughter "hasn't slept for the fifth night in a row. She doesn't have any strength to walk and is afraid to leave the car."

Barcz asked her granddaughter for an update, but the line dropped before she got an answer. All she can do now is wait and hope.