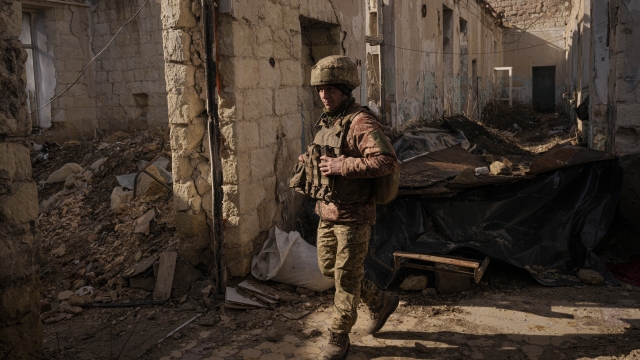 In a message to the nation, Ukraine's president sought to project both calm and defiance.

"We are on our land," President Volodymyr Zelenskyy said. "We are not afraid of anything or anyone.  We do not owe anything to anyone. We are confident of this."

That determination was seen here in Lviv, where emergency responders are training teenagers in safety and first aid. In the past week, 2,700 students have learned what to do if, for example, they come across a land mine.

While in good spirits, they are also well aware of the peril this moment presents for their country. Iryna Zhuk is one student who spoke with Newsy.

IRYNA ZHUK: I'm really worried about what I saw yesterday because all the people are in panic.

NEWSY'S JASON BELLINI: But do you think the Russians would come here?

BELLINI: What would happen if they came here?

ZHUK: It would be a war and a lot of people would die.

Also in Lviv, a small group protested outside the Russian consulate where Russian guards filmed the activists.

Russia later announced it is pulling its diplomatic staff out of Ukraine.

The acting American ambassador to Ukraine made an appearance in Lviv's central square to condemn Putin's actions.

"We all heard the speech that President Putin delivered yesterday," Kristina Kvien said. "His outrageous statements about Ukraine and the Ukrainian people were delusional, reflecting a warped vision reminiscent not of a global leader but of Europe's worst authoritarians."

The American diplomat is back after spending the night across the border in Poland.

"We have decided that we need to be as cautious as possible, overnight in Poland, but come back every day to Ukraine," Kvien said.

Lviv, for now, is seen as a safe haven with indications that Zelenskyy would relocate here if the capital, Kyiv, is attacked.