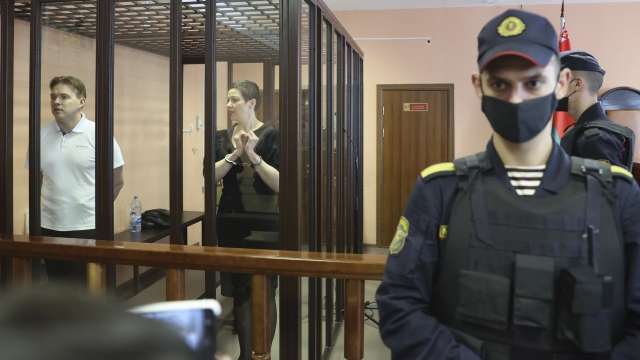 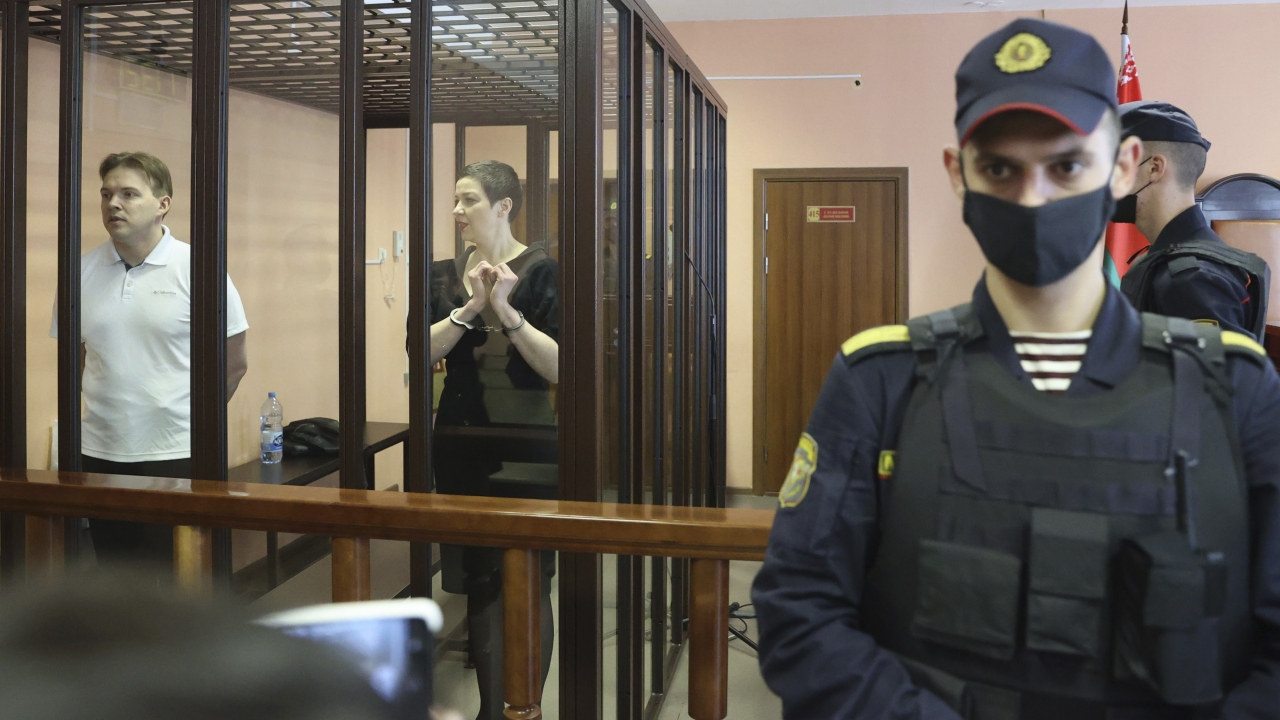 A court in Belarus on Monday sentenced two leading opposition activists to lengthy prison terms, the latest move in the relentless crackdown that Belarusian authorities have unleashed on dissent in the wake of last year’s anti-government protests.

Maria Kolesnikova, a top member of the opposition Coordination Council, has been in custody since her arrest last September. A court in Minsk found her guilty of conspiring to seize power, creating an extremist organization and calling for actions damaging state security and sentenced her to 11 years in prison.

Lawyer Maxim Znak, another leading member of the Coordination Council who faced the same charges, was sentenced to 10 years in prison.

Kolesnikova, who helped coordinate monthslong opposition protests that erupted after an August 2020 presidential vote, resisted authorities’ attempts to force her to leave the country.

Kolesnikova and Znak went on trial behind closed doors, with their families only allowed to be present at the sentencing hearing on Monday.

“For many, Maria has become an example of resilience and the fight between good and evil. I'm proud of her,” Kolesnikova's father, Alexander, told The Associated Press on Monday. “It's not a verdict, but rather the revenge of the authorities.”

Belarus was rocked by months of protests fueled by President Alexander Lukashenko’s being awarded a sixth term after the August 2020 presidential vote that the opposition and the West denounced as a sham. He responded to the demonstrations with a massive crackdown that saw more than 35,000 people arrested and thousands beaten by police.

Kolesnikova, 39, has emerged as a key opposition activist, appearing at political rallies and fearlessly walking up to lines of riot police and making her signature gesture — a heart formed by her hands. She spent years playing flute in the nation’s philharmonic orchestra after graduating from a conservatory in Minsk and studying Baroque music in Germany.

In 2020, she headed the campaign of Viktor Babariko, the head of a Russian-owned bank who made a bid to challenge Lukashenko, but was barred from the race after being jailed on money laundering and tax evasion charges that he dismissed as political. Babariko was sentenced to 14 years in prison two months ago.

Kolesnikova then joined forces with former English teacher Sviatlana Tsikhanouskaya, who was running in place of her jailed husband Sergei, an opposition blogger, as the main candidate standing against Lukashenko, and Veronika Tsepkalo, wife of another potential top contender who had fled the country fearing arrest.

The three appeared together at colorful campaign events that were in stark contrast to Lukashenko’s Soviet-style gatherings.

Shortly after the election, Tsikhanouskaya left Belarus under pressure from the authorities and is currently in exile in Lithuania.

In September 2020, as Belarus was shaken by mass protests, the largest of which drew up to 200,000 people, KGB agents drove Kolesnikova to the border between Belarus and Ukraine in an attempt to expel her. In the neutral zone between the two countries, Kolesnikova managed to rip up her passport, broke out of the car and walked back into Belarus, where she was immediately arrested.

Just before the start of her trial last month, Kolesnikova said in a note from prison that authorities offered to release her from custody if she asks for a pardon and gives a repentant interview to state media. She insisted that she was innocent and rejected the offer.

Speaking to the AP on Monday, Tsikhanouskaya described Kolesnikova's ripping up her passport as “a historic deed.”

“Along with it (her passport), she tore apart all the plans of the regime,” Tsikhanouskaya said.

“The regime would want to see Maxim and Maria broken and weakened. But we see our heroes and strong and free inside. They will be free much earlier. Prison terms invented for them shouldn't scare us — Maxim and Maria wouldn't want that. They would want us to remember how Maria smiles, and to listen to Maxim singing,” Tsikhanouskaya added.

“Locking up political opponents will only deepen the pariah status of the Lukashenko regime," Raab said.

In Brussels, European Commission spokesman Peter Stano said that “the EU ... reiterates its demands for the immediate and unconditional release of all political prisoners in Belarus (now numbering more than 650)," including Kolesnikova and Znak.

The verdicts Monday are “a symbol of the ruthless methods, the repression and intimidation by the Belarusian regime of opposition politicians and civil society,” German Foreign Ministry spokeswoman Andrea Sasse said in Berlin.