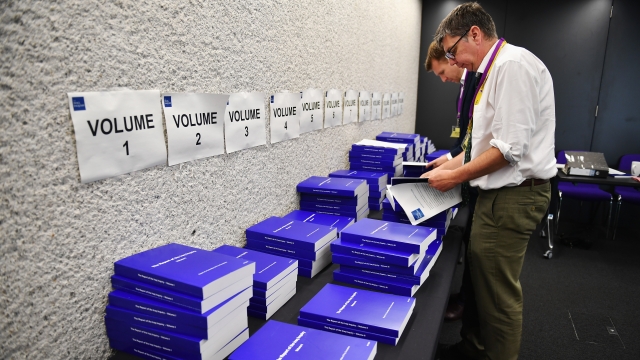 The United Kingdom joined the Iraq invasion in 2003 before all options were exhausted, according to the findings of an inquiry released Wednesday.

"Military action at that time was not a last resort," Sir John Chilcot, the chairman of the Iraq Inquiry committee, said in a statement.

The inquiry, known widely as the Chilcot Report for inquiry chairman Sir John Chilcot, was formed in 2009 by then-Prime Minister Gordon Brown.

Its goal was to find out whether the U.K. needed to invade Iraq and whether it was "right" in doing so. The committee also was tasked with determining whether the U.K. could and should have been prepared for what happened after the invasion.

The inquiry found the decision to invade Iraq was based on flawed, unchallenged intelligence. The committee determined Saddam Hussein did not pose an "imminent threat" in 2003.

However, Chilcot said military action "might have been necessary at some point."

The prime minister at the time of the invasion, Tony Blair, told the inquiry the issues faced after the invasion couldn't have been expected.

But the committee disagreed and was critical of Blair. It said he "overestimated his ability to influence U.S. decisions on Iraq," and it released memos Blair sent to then-President George W. Bush. In one, Blair told Bush, "I will be with you, whatever."

"The U.K.'s relationship with the U.S. has proved strong enough over time to bear the weight of honest disagreement. It does not require unconditional support when our interests and judgments differ," Chilcot said later.

The inquiry found Blair had been warned the invasion could lead to instability and a greater threat from Al-Qaeda, among other things.

Blair released a statement in response to the report that said in part: "The report should lay to rest allegations of bad faith, lies or deceit. Whether people agree or disagree with my decision to take military action against Saddam Hussein; I took it in good faith and in what I believed to be the best interests of the country."

Later Wednesday, Blair addressed the media and apologized for the intelligence assessments at the time, as well as the aftermath of the invasion, which included a rise in sectarian violence that claimed the lives of hundreds of thousands of Iraqis.

"For all of this, I express more sorrow, regret and apology than you may ever know or can believe," he said.

Protesters gathered outside the building where the report was released and outside Blair's home, calling for him to face punishment. However, it is unlikely he will face war crimes charges.