The UK's Brexit Secretary Resigned, And He's Already Been Replaced 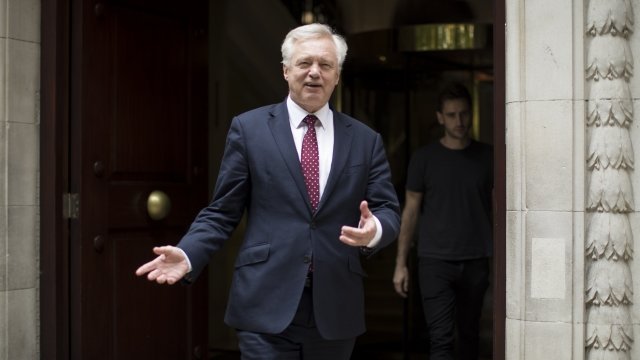 After sending in his resignation letter on Sunday, the U.K.'s now-former Brexit secretary David Davis has already been replaced.

Let's take a step back. On Friday, Prime Minister Theresa May reportedly gave her cabinet an ultimatum — get on board with her Brexit plan or quit. And it seemed to work, since they came to an agreement and set a date for the U.K.'s exit from the European Union.

But Davis didn't agree with that plan, which proposed using a "common rulebook" to allow the free trade of goods between the U.K. and the EU. So he sent May his resignation letter.

Davis wrote the U.K. needs a Brexit secretary who "is an enthusiastic believer in your approach, and not merely a reluctant conscript." May responded with her own letter thanking Davis for his service.

Pro-Brexit members of Parliament are reportedly considering a vote of no confidence in May, but her supporters reportedly think she could win it.

Dominic Raab has been appointed to replace Davis as the secretary of state for exiting the European Union. The Guardian calls him a "prominent Brexiter." Davis told the BBC that Raab will be "very effective" in the position.