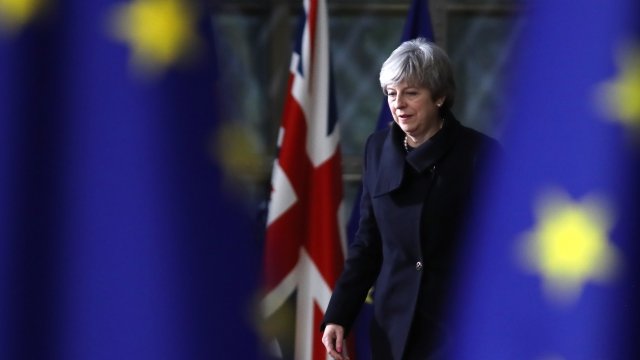 SMS
UK Releases Plans In Case It Can't Reach A Brexit Deal With The EU
By Jake Jones
By Jake Jones
August 23, 2018
The U.K. is set to leave the bloc in March, but it's still not clear what its relationship with the EU will look like.
SHOW TRANSCRIPT

The British government released a number of documents Thursday to help businesses, hospitals, banks and citizens prepare for Brexit if no deal is struck with the European Union.

Negotiations on how a post-Brexit relationship between the E.U. and U.K. would look have yet to produce a deal, even though the U.K. is set to leave the bloc in March.

The documents, the first of many, cover a variety of things, from how to handle nuclear waste to how to label tobacco products and organic food. Border security and travel are also a concern.

Most notable, however, is the projected impact on Britain's economy in a no-deal scenario. The documents predict, and attempt to lay out plans to deal with, possible credit card surcharges, loss of bank and pension access, and even a shortage of medicine.