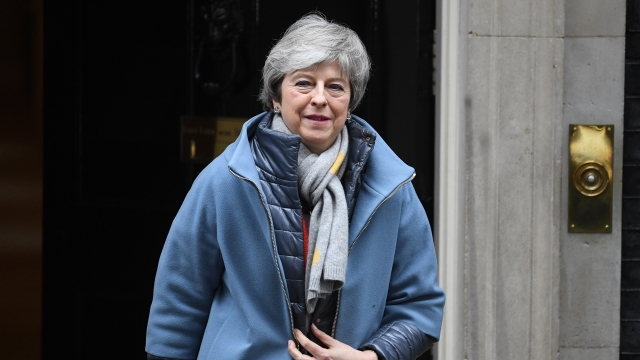 U.K. Prime Minister Theresa May is in Brussels Thursday to pitch her request to delay Brexit by three months directly to other members of the European Union.

As things currently stand, the U.K. is set to exit the European Union on March 29. But May sent a letter to European Council President Donald Tusk on Wednesday asking for that date to be pushed back to June 30.

"This delay is a matter of great personal regret for me. And of this I am absolutely sure: You, the public, have had enough. ... You want this stage of the Brexit process to be over and done with. I agree. I am on your side," May told the public in a speech Wednesday.

May's request for a Brexit delay was expected. British lawmakers have voted down her transition plan twice now, and the speaker of the House of Commons said a third vote won't be held until May makes significant changes to the deal.

On top of all that, Parliament's boxed May in even more by ruling out a no-deal Brexit.

May's request for a Brexit extension will need to be approved by all 27 other EU member countries in order to become official.

Tusk appeared to issue an ultimatum to British lawmakers Wednesday — saying he believed the EU would agree to the Brexit delay, but only if Parliament approved May's transition plan.

One thing that's complicating matters is the upcoming European Parliament elections scheduled for May. Reuters reports the European Commission told EU leaders that the U.K. would be required to participate in those elections if it stays in the EU past May 23.