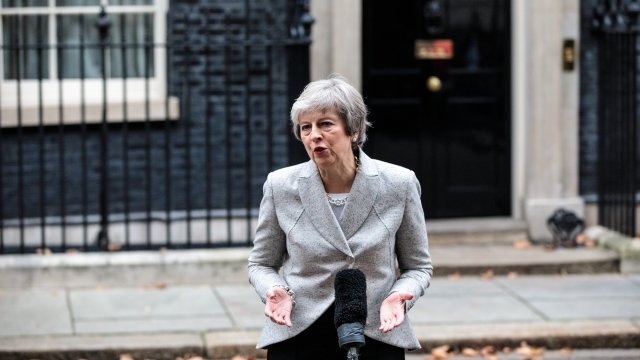 U.K. Prime Minister Theresa May survived a vote Wednesday that tried to oust her.

The vote was triggered after at least 48 Conservative members of Parliament submitted letters, demanding a no-confidence vote in May's leadership.

In order to remain the leader of her Conservative Party — and, by extension, the leader of the British government — May had to get at least 158 votes. Party rules state she can't be challenged again in the next year.

Much of the discontentment with May's leadership is tied to the ongoing Brexit negotiations. The U.K. is set to leave the European Union on March 29.

EU leaders have already approved the Brexit deal, but May's had a hard time shoring up support for it within the British government. The House of Commons was originally supposed to vote on the deal Tuesday, but May postponed it after it became clear she didn't have the necessary votes.