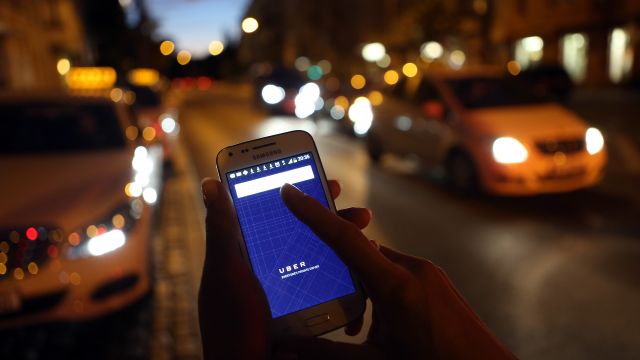 SMS
Uber's First-Ever Transparency Report Shows It Released A Lot Of Data
By Katie Link
By Katie Link
April 12, 2016
A regulatory agency requested information from Uber 33 times in six months. Apparently that adds up to data from 12 million riders and drivers.
SHOW TRANSCRIPT

On Tuesday, Uber did something it’s never done before: it released a Transparency Report.

The ride-hailing company rounded up all of the information it provided to U.S. regulators, airports and law enforcement officials during the last six months of 2015.

Releasing transparency reports has become a common practice among technology companies ever since Google put out its first report in 2010.

But Uber’s report is a bit different than others. According to this report, a regulatory agency requested data 33 times in six months. Doesn’t seem like a lot, right? Well, Uber says those 33 requests included information on more than 12 million drivers and riders.

The San Francisco-based startup said: "While most tech companies are dealing with bits — emails, photos and messages — Uber is in the bits and atoms business. Our technology connects riders and drivers in the real world, a world that is regulated by agencies."

The company says regulators aren't going after your personal information, but some data could establish "patterns of behavior." Regardless, Uber did release some sort of data for all 33 of those requests.

Its compliance rate on airport regulations and law enforcement requests? Also good. Uber reported sharing data in all instances where it was requested.

Ultimately, Uber says it hopes the transparency report starts a public conversation about the "amounts of information regulated services should be required to provide to their regulators, and under what circumstances."

This video includes clips from Uber and images from Getty Images.