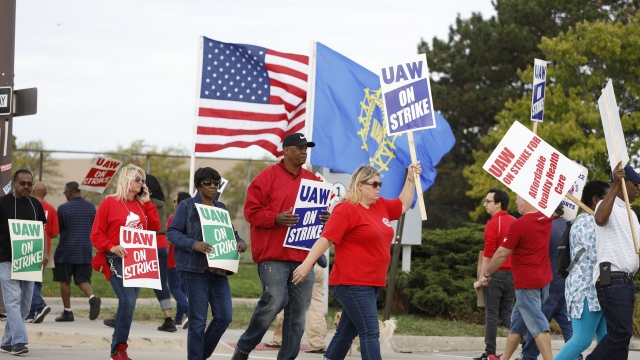 The UAW-GM council voted Thursday to ratify a tentative contract that General Motors and the United Automobile Workers agreed upon just a day before. Now, the contract goes to UAW' 48,000 members, who will vote on it.

Members will have the opportunity to vote from Saturday until Oct. 25.

The contract says full-time temporary workers will be given a shortened path to permanent status starting Jan. 6, 2020. On Jan 1, 2021, part-time temporary employees will be given a path to become regular-status employees. It also provides improved paid and unpaid time off for temporary workers. There won't be a change to the health care plan, but there won't be any additional costs to members.

The deal also includes 3% wage increases and 4% bonuses in alternating years for eligible permanent employees. And GM will pay $1,000 into the personal savings plan of each member who's currently accruing service in the defined benefit pension. If the contract is signed, "seniority employees" will receive an $11,000 "ratification bonus," and temporary employees will get a $4,500 bonus.

GM has also agreed to eliminate the $12,000 cap on profit-sharing payouts. That means all of GM's North American profits would generate payments to union workers, based on the current $1,000 per $1 billion formula, with no limits.

GM said in a statement: "Our goal during these negotiations was to ensure the future of General Motors is one that works for our employees, dealers, suppliers and the communities where we operate. The agreement reflects our commitment to U.S. manufacturing through the creation of new jobs and increased investment."

Brian Rothenberg, the director of public relations for United Automobile Workers, spoke at a press conference about what this progress means for the workers and their families.

"This strike actually became more than just a strike for the UAW. It was about the hearts and minds of American workers in the middle class. It was an outpouring of support that I think President [Gary] Jones and Vice President [Terry] Dittes said they will never, ever forget."

Thursday's announcement also includes the closure of the GM plant in Lordstown, Warren Transmission in Michigan and Baltimore Transmission.

Workers began their strike about a month ago. The UAW-GM council has recommended that members remain on strike until the contract deal is finalized.