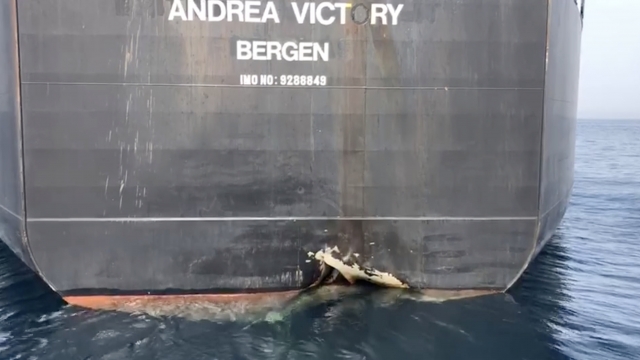 Four commercial vessels were damaged on Sunday in the Gulf of Oman, near a key chokepoint for the worldwide oil trade.

Four commercial ships from different countries were damaged while at sea in the Middle East in an act some countries are calling "sabotage."

The so-called attacks happened Sunday in the Gulf of Oman. The United Arab Emirates  Ministry of Foreign Affairs says no one was injured or killed, and none of the damage caused any of the ships to leak.

The four vessels are all tankers. Two ships fly the Saudi Arabian flag, one flies the UAE flag, and the fourth ship is Norwegian.

Despite some Middle Eastern countries calling the incident sabotage, there are still a lot of questions. Video shows damage to the hull of the Andrea Victory, the Norwegian ship, but the damage on the other vessels isn't easily visible.

The location of these alleged attacks is noteworthy. The ships were just outside the Strait of Hormuz, which is a key chokepoint for the worldwide oil trade.

None of the countries involved named a suspect, but the generic accusations of sabotage come at a time when tension in the region is already high. Iran recently announced it would stop complying with some of the terms of the landmark nuclear deal.

The UAE asked the U.S. for help investigating the alleged attacks. Officials will look at the damage and try to figure out what might have caused it.