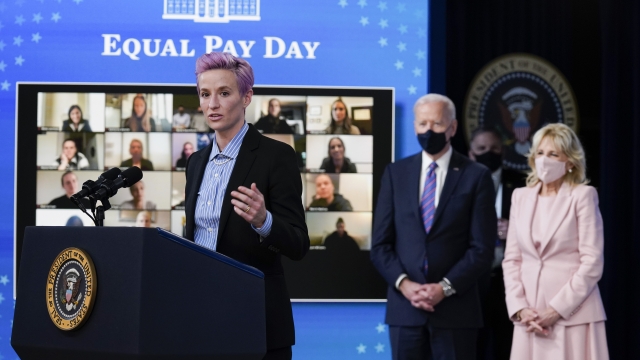 The Census Bureau estimates that a woman earns about 82 cents for each dollar a man earns -- even less if she's a woman of color.

The women's soccer team has been vocal about the gender pay gap: After winning its fourth World Cup in 2019, it sued the U.S. Soccer Federation over alleged wage discrimination.

On Wednesday, players Margaret Purce and Megan Rapinoe watched President Biden sign a proclamation honoring the day and spoke with him about how White House can help set new goals for equality.

"You see, despite all the wins, I'm still paid less than men who do the same job that I do. For each trophy, of which there are many, and for each win, for each tie and for each time that we play, it's less," Rapinoe said. "And I know there are millions of people who are marginalized by gender in the world and experience the same thing in their jobs."