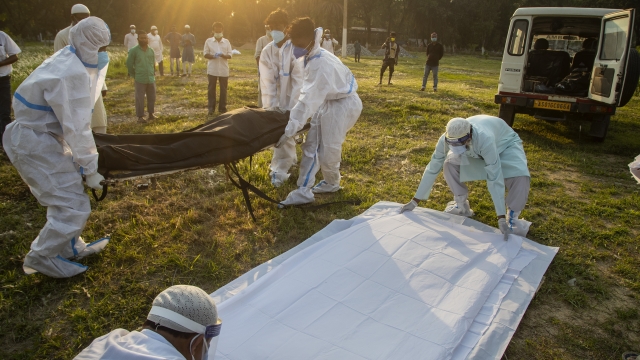 The White House said it would begin sharing its supply of AstraZeneca vaccines once it clears a federal safety review.

The Biden administration announced Monday it would begin taking direct steps to fight the pandemic around the world.

The White House said it would begin sharing its supply of AstraZeneca vaccines once it clears a federal safety review. As many as 60 million doses could be distributed in the coming months.

"We do not currently need to use AstraZeneca in our fight against COVID over the next few months," White House press secretary Jen Psaki said Monday.

The announcement followed a U.S. pledge to help India as one of the world's most populous countries struggles with a massive outbreak. Vaccines so far have not been part of the U.S. aid package.

"I know that the situation of giving out vaccines is something on the table that is being actively discussed," White House medical adviser Dr. Anthony Fauci told Newsy.

The White House says the Indian government has not requested ready-made vaccines from the U.S. Instead, senior administration officials say the U.S. is diverting its own order of raw materials to India so they can make their own AstraZeneca shots.

On Monday, India saw over 350,000 new cases, breaking the global record for new daily cases for the fifth consecutive day.

Indian health officials say hospitals are running out of oxygen and PPE, and crematoriums have become overwhelmed as deaths reach crisis levels.

President Biden assured India's Prime Minister Narendra Modi in a phone call that the U.S. would provide "a range of emergency assistance, including oxygen-related supplies, vaccine materials and therapeutics."