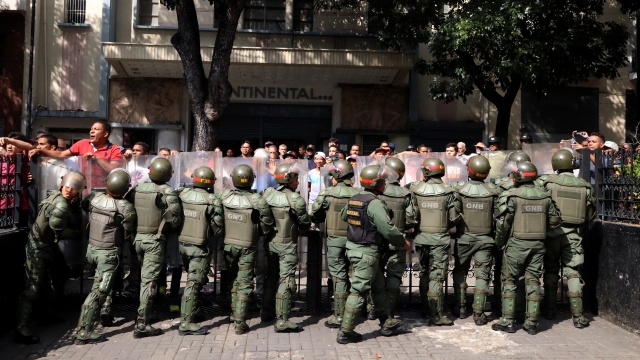 The U.S. Treasury Department is imposing new sanctions on seven Venezuelan politicians after they attempted to "illegitimately seize control" of Venezuela’s National Assembly.

The Treasury Department says the seven politicians, on behalf of Venezuelan President Nicolás Maduro, blocked self-declared President Juan Guaidó and other lawmakers from entering the country’s National Assembly earlier this month. They then held a fraudulent election to replace Guaidó with lawmaker Luis Parra as the president of the National Assembly. Parra is among the seven being hit with the sanctions.

However, two days after the election, Guaidó and a majority of the National Assembly members gained access to the building and discounted Parra's appointment in another vote.

In a statement Monday, Treasury Secretary Steven Mnuchin said, "These and other designated officials can have sanctions removed if they side with the people of Venezuela and Juan Guaidó as their legitimate leader."

These sanctions come as efforts to fully remove Maduro from power in the country appear to be slowing, months after Guaidó declared himself the country's rightful president and streets filled with anti-government protesters.

Amid the political turmoil, the country is also struggling with an economic crisis, significant food shortages and a refugee crisis.