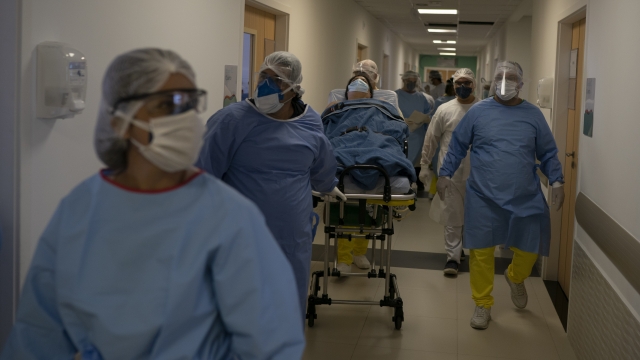 SMS
U.S. Will Suspend Entry For People Who Were Recently In Brazil
By Meg Hilling
By Meg Hilling
May 25, 2020
President Trump, who announced the ban in a proclamation, pointed to the rising number of COVID-19 cases in Brazil.
SHOW TRANSCRIPT

President Trump plans to deny entry to the U.S. for anyone who has been to Brazil within the past 14 days.

In a proclamation issued Sunday, President Trump attributed the decision to the growing number of COVID-19 cases in Brazil. According to Johns Hopkins University, as of Monday Brazil was second behind the U.S. in terms of the most documented cases of the virus.

President Trump wrote that "The potential for undetected transmission of the virus" by people coming to the U.S. from Brazil "threatens the security of our transportation system and infrastructure and the national security, and I have determined that it is in the interests of the United States to take action to restrict and suspend the entry."

This proclamation goes into effect at 11:59 p.m. ET on Thursday. President Trump says he remains committed to "facilitating trade" between the two countries during the travel suspension.

The virus continues to spread in Brazil, and emergency medical flights into remote regions of its Amazon basin have tripled. Meanwhile, hospitals in major cities like Sao Paulo and Rio de Janiero are reportedly becoming overwhelmed with the number of new cases and have begun to convert medical centers to deal with patient overflow.