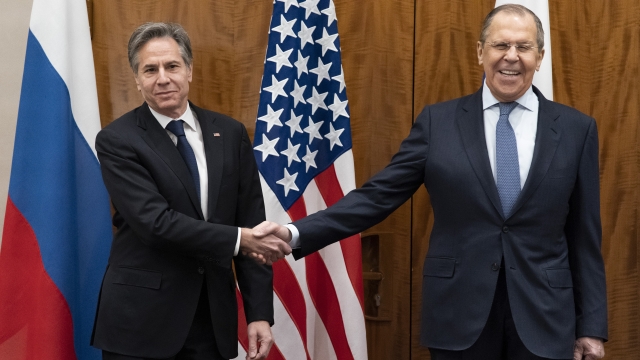 Secretary of State Antony Blinken said it was an exchange of concerns and not a negotiation as Russia gathers more troops near the Ukraine border.

U.S. Secretary of State Antony Blinken said he didn't expect any breakthroughs in talks with Russia on Ukraine, but the two sides are on a "clearer path" to understanding each other's concerns.

He said he thinks Moscow will invade and warned Putin that Russia would pay a "dear price" in lives lost and a possible cuttoff from global banking.

With an estimated 100,000 Russian troops massed near Ukraine, many fear Moscow is preparing an invasion, although Russia denies that. The U.S. and its allies are scrambling to present a united front to prevent that or coordinate a tough response if they can't.

The talks were seen as a possible last-ditch effort at dialogue. Lavrov called them "constructive and useful" and said that the U.S. agreed to provide written responses to Russian demands on Ukraine and NATO next week. That could at least delay any imminent aggression for a few days.

But Lavrov declined to characterize that pledge.

"I can't say whether we are on the right track or not," he told reporters. "We will understand that when we receive the U.S. written response to all of our proposals."

Moscow has demanded that the NATO alliance promise that Ukraine — a former Soviet republic — will never be allowed to join. It also wants the allies to remove troops and military equipment from parts of eastern Europe.

The U.S. and its NATO allies have flatly rejected those demands and say that Russian President Vladimir Putin knows they are nonstarters. They have said they're open to less dramatic moves.

Washington and its allies have repeatedly promised "severe" consequences such as biting economic sanctions — though not military action — against Russia if an invasion goes ahead.