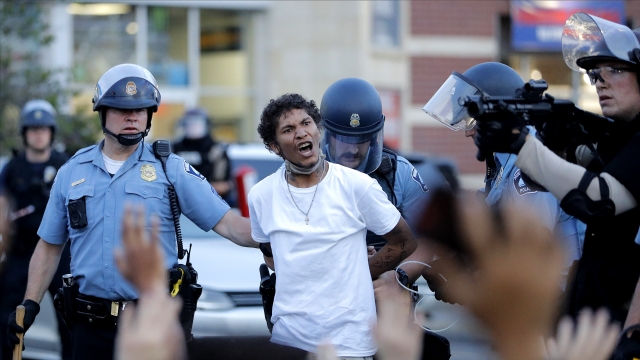 SMS
China, Russia Accused Of Using Protests To Sow Discord On Social Media
By Tyler Adkisson
By Tyler Adkisson
June 1, 2020
Experts say China's use of Facebook and Twitter to spread protest messages is intentional, since those platforms are banned for most Chinese citizens.
SHOW TRANSCRIPT

Experts and officials are concerned that the U.S. could be, once again, falling victim to foreign actors encouraging division on social media.

“I've seen a number of Tweets from the Chinese today that are taking some sort of pleasure and solace in what they're seeing here,” said national security adviser Robert O’Brien on ABC's "This Week With George Stephanopoulos."

These accusations have some credibility.

"We have seen from April of last year to now over a 300% increase in Chinese diplomats and Chinese Embassies who now have Twitter accounts."

Schafer: "I think they’re probably looking for an endgame similar to what I think we look for from Russia when engaging in conspiracy theories. It’s to throw enough competing narratives out in the information space that it becomes difficult for the average information consumer to decide what’s true and what’s not.

Additionally, experts say it's too early to attribute specific disinformation about the protests to individual countries. It's also too early to know how much of an impact those messages may have had.

And in many cases, most posts aren't about spreading disinformation, but rather amplifying unfavorable information. On Sunday, an account with just three followers managed to make #DCBLACKOUT trend on Twitter, amassing roughly 500,000 tweets in the first nine hours after being posted.