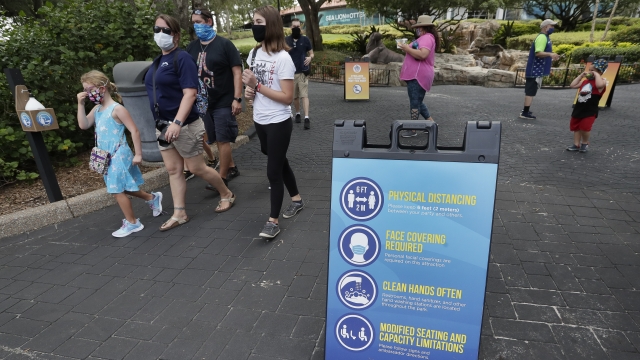 On Friday, the United States reported its largest single-day increase of new coronavirus cases since the start of the pandemic.

According to a tally by Johns Hopkins University, more than 40,000 new cases were reported, dusting the prior record set in April.

The surge comes as parts of the nation are reinstating some lockdown restrictions. That's after more than 30 states saw increasing numbers. At least five of those states reported their highest single-day records for infections.

New York, which was once the epicenter of the outbreak inside the U.S., now has the lowest infection rate in the entire country.

On Friday, New York reported less than 1% of people tested were positive for coronavirus. The state's number of infections, hospitalizations and death rates have all been on a steady decline.

Meanwhile, while infection rates are surging in many parts of the U.S., a report from the CDC says the overall rate of new virus deaths has actually been declining for more than two months.

According to the report, the percentage of deaths relating to pneumonia, influenza or COVID-19 fell from 9.5% to 6.9% of cases over the course of one week. But the CDC warns the numbers could change as more death certificates are processed in coming weeks.